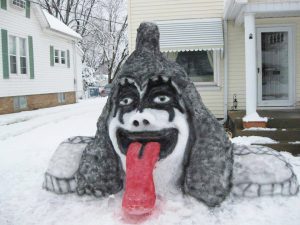 Freddie Novosel is not your average adult who enjoys helping children make snowmen. Thirty years ago, Novosel became tired of making basic snowmen and started making elaborate snow sculptures that draws people from around Collinsville to his family’s house at 609 N. Keebler after each snowfall.

Almost six years ago, his early spring creation of KISS co-founder Gene Simmons with his trademark tongue sticking out drew the attention of CNN reporter Anderson Cooper, making his RidicuList on Anderson Cooper 360.

Novosel’s first adaptation of the classic snowman had arms, glasses and a mohawk all made of snow. A concrete finisher by trade, Novosel doesn’t use any special equipment to create his sculptures, just his hands and spray paint.

If not a lot of snow falls, Novosel’s neighbors let him take the snow from their driveways until he has enough. If he has trouble getting the snow to pack the way he needs it to, Novosel will add a little bit of water.

Novosel also has lots of help from his family when working on his sculptures. His wife Christine works behind the scenes  to rotate his gloves, keep his coffee hot, and help with ideas. His 17 year old son Freddie helps shovel the snow and make piles.

This year’s inaugural creation was Louie, the adorable bear mascot of the St. Louis Blues. It didn’t take long for word to spread and Louie came over to have his picture taken with his likeness. 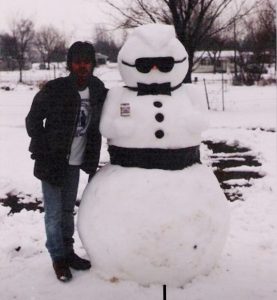 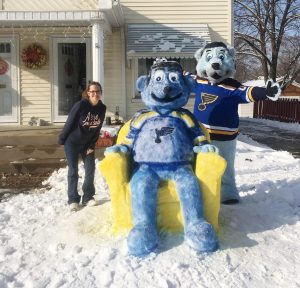