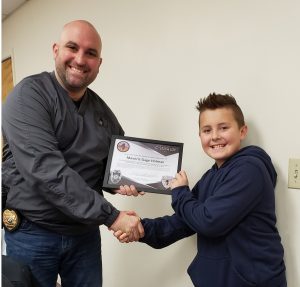 “He gave up an expensive item of his own for another kid who needed it more,” Singleton told the board. The mayor and trustees gave the boy a resounding wave of applause.

The police chief reported that the recent “Shop With a Cop” event had gone very well.

Park. He said that the concession stand went through 160 hot dogs, joking that he had eaten five of them himself.

“I’d like to give a special thank you Santa, and also to the streets and water department workers who did an amazing job with setup,” Singleton said. “I can’t tell you how many compliments we got on the event this year.

Parks committee chairman Mark Voigt gave a quick progress report on the Village Park solar panel and pavilion project. He said that he would be getting surveying done and gathering bids for pouring the footing to start the pavilion as soon as weather permits. He told the mayor that he would coordinate with trustee Darren Apken on having locates done for the project.

Village resident Lynn Scherer was unanimously voted in as the new member of the planning commission.

The board also voted in favor of moving forward on purchasing a utility bed truck with a remote- controlled light after reviewing financials provided by Bob Redding. The state bids have not yet come out. Redding said that he expected the price to fall in the neighborhood of $51,324.00 but that the state bid had the potential to be lower.

The mayor brought the trustees into executive session to discuss 5ILCS 120/2 (C) (1) regarding the appointment, employment, compensation, discipline, performance or dismissal of specific

employees of the public body. After reconvening the public meeting, the trustees scheduled another executive session to take place at 10 a.m. on December 30 to review employee work hours, job descriptions and expectations.

Trustee Steven Bartlett’s motion to increase the minimum check time to be paid for weekends and holidays to two hours (from one hour) met with board approval.

January, 2020 board meetings will take place at the village hall on January 8 and January 22.