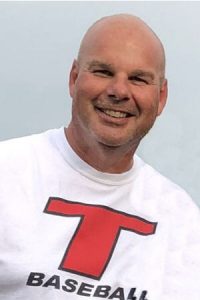 Robert “Bob” Peter Parres, 59, of Troy, and formerly of Ellisville, Missouri passed away unexpectedly on Monday, December 16, 2019 at Anderson Hospital in Maryville. He was born March 14, 1960 in St. Louis, Missouri, a son of the late Thomas and Dolores (Kling) Parres.

He married Bonnie Jean (Hornbeck) Parres on June 2, 2000 in St. Louis, Missouri and she survives.

Bob was Vice President of Food and Beverage with Penn Gaming and worked with Hollywood Casino and River City Casino. He was a youth baseball coach and cherished working with the Troy Thunder Baseball team. He had a big heart, always willing to help others, was a hard worker and loved and adored his family. He enjoyed cooking and sports, especially the St. Louis Cardinals and Blues. He will be remembered for the love and special times shared with his family and many friends. In addition to his beloved wife of 19 years, he is survived by a daughter and son-in-law, Allison and Justin Barnhart of Ellisville, Missouri; stepson, Tyler Lewis of Troy; son, Drew Parres of Troy, and son, Jacob Parres of Troy; two grandchildren, Benjamin and Jaxon Barnhart of Ellisville, Missouri; four brothers and three sisters-in-law, Thomas and Loretto Parres of Pennsylvania, Ronald Parres of Alton, Lawrence and Victoria Parres of St. Louis, and John and Crystal Parres of Texas; sister-in-law, Cynthia Parres- Dillard of Kansas City, Missouri; mother-in-law, Bonnie Hornbeck of Troy; many nieces; nephews; other extended family, co-workers and friends.

In addition to his parents, he was preceded in death by three brothers, Fr. Gerald Parres, Dennis Parres and Kenneth Parres and his father-in-law, Gene Hornbeck.

In celebration of his life, visitation was held at Irwin Chapel, in Glen Carbon on December 20.

Burial was at Friedens Cemetery in Troy.

Memorials may be made to the American Heart Association and may be accepted at the funeral home.

Irwin Chapel in Glen Carbon was in charge of arrangements.