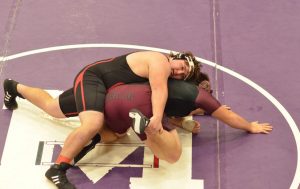 Collin North pinning Caleb Bass/Red Bud to get him to the championship round. Photo by Sandy Bakarich

The Triad wrestling team had a big day Saturday to make up ground on much of the 27 team field at the 50th Mascoutah Invitational Tournament. The Knights were able to take 4th place with 155 team points.

Mattoon won the title with 176 points. They bested 2nd place Collinsville by three points and Civic Memorial finished in 3rd place with 172.5 points.

“Overall I’m pretty pleased especially after our first day. Our first day we wrestled just terrible and we were really lucky to be in 11th place. We came back today and the kids that were still in the tournament wrestled their tails off and beat some kids that were pretty decent. All in all coming from 11th place to 4th place, we moved up seven places, I was really happy with the kids today,” coach Russ Witzig said.

Bakarich went 3-0 with two pins over the two days. In his title match he squared off with Aron Taylor of Carbondale. Bakarich claimed the title with a 5-3 decision in sudden victory overtime.

The Triad grappler led 3-2 late in the match but was assessed a penalty point to tie the match with :05 to go. 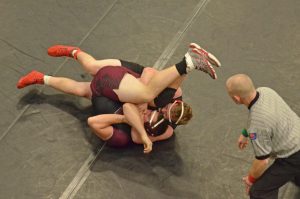 It was the first time this year Bakarich has been out of the 1st period.

After an opening round bye, he pinned Ian Asklund of Champaign Central in 1:28. In the semifinals he pinned Dominic Thebeau of Belleville East at the :43 mark.

At 220, North also received a bye in the first round and scored a 9-6 decision over Quincy’s Avery Bodi. In the semifinals, he pinned Caleb Bass of Red Bud.

In the finals, Ethan Tinarwo of O’Fallon fell by pinfall to North. It was North’s second win over Tinarwo on the season. The two wrestled at Chatham two weeks ago.

“It’s hard to beat a good guy twice. I just felt like he got better as the match went on and he actually looked really focused. This match, just looking at him, he was ready to go. He eliminated mistakes that he had made throughout the day earlier. He really was more physical than that guy and ended up catching him on his back and had the opportunity to pin him and was lucky enough to get the pin,” said Witzig.

At 113 lbs., Chase Hall fell to Coby Haney of Mattoon in the finals on a 2-1 decision. The two had met at the Class 2A state meet last spring for 5th place with Hall coming out on top.

In Hall’s first match he beat Haytham Alshammari of Carbondale by pinfall. He also pinned Gavin Hearren of Waterloo in his next match.

He decisioned Ben Skaggs of Civic Memorial 7-0 to move to the finals.

At 182 Kaden Marmon lost his semifinal bout to River Flute of Marion.

In the 3rd place match, Marmon fell to Thomas Culp of Quincy. Culp was ranked #3 in Class 3A.

“For him to come back and place 5th after the start he had the first day was pretty amazing. He had kind of a turn around day. But that’s the type of wrestler he is. He’s capable of doing well he’s just got to get it all together,” Witzig said.

The Knights will have the opportunity to wrestle again Friday and Saturday at Granite City.