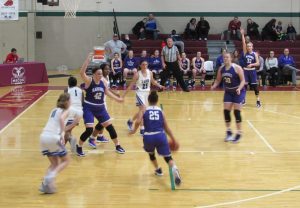 The Kahok Girls go head to head with Ladue in the MICDS Holiday Tourney. Photo by Mark Jurgena

Ladue (Mo.) had an 11-0 run in the last 2:36 of the first quarter to create a margin Collinsville just could not overcome as they lost 52-39 in the semifinals of the MICDS Holiday Tournament last Saturday.

“That’s kind of where we lost the game. We couldn’t get anything to drop. Then Faith (Liljegren) rolled her ankle and it kind of sent us into a different tone and a different pace. She was able to come back but she wasn’t herself,” said coach Lori Billy.

The Kahoks played even with Ladue in the 2nd quarter thanks to a late 5-2 run.

Two free throws from Liljegren plus a free throw and a basket from Kristyn Mitchell cut the lead to 11 at the half.

Both teams had trouble finding the bucket in the 3rd quarter as they combined to go 5-32 from the floor.

“We came out in a zone and spread out the zone to cover their shooters. I thought our zone hurt them and we played it well. We got enough pressure on top that they were kind of throwing the ball away,” said Billy.

CHS went on a 5-0 run late in the quarter thanks to three points from Mitchell and two from Caite Knutson.

With that run, CHS was able to get the deficit down to nine points, but would get no closer..

“I was thinking we were in the game. I told the kids just chip away at it one bucket at a time that’s all you got to do, but you’ve got to contain. You’ve got to make sure to board and you contain them. We turned around and went cold and they didn’t,” said Billy.

For the game Mitchell and Knutson scored 11 points each. Mitchell grabbed 12 boards as well.

The Kahoks ran out to a 26-1 lead after the 1st quarter for a big win in their tourney opener on December 26th.

“We came out at the very beginning with our press. Out of the press we were able to make them turn the ball over quite a bit,” said Billy.

Offensively CHS came out firing with a quick three from Liljegren and a bucket from Riley Doyle to go up 5-0.

“We were able to build on that. We just had some energy and some focus. The shots were dropping. We were moving the ball well, we had good looks inside and we were able to knock some shots down,” Billy said.

The Kahoks built a 17-0 lead before Pattonville sank a free throw.

Mitchell had 22 points while Doyle had a career high 14. Liljegren had 12.

“Riley had a big game. She hit threes when we needed her to step up and hit some shots,” said Billy.

CHS grabbed 45 rebounds in the game. Bush led with 10 while Mitchell and Jenna Shelley had nine each.