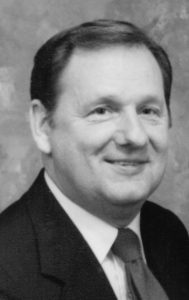 Nestle Corporation and worked as a realtor with Landmark Realty for several years following his retirement. He was an avid fan of the St. Louis Cardinals and enjoyed watching the games. He also enjoyed years of golfing, traveling and spending time with family. He is survived by four children and their spouses, Bernard R. and Janice Maxfield of Granite City, Illinois, Jody and Kaye Maxfield of Troy, Connie and Joseph O’Neill of Crestview, Florida, and Carla and Pete Diamond of

Bethalto, Illinois; son-in-law, Gary Thomas of Mt. Olive; eleven grandchildren; seven great grandchildren; and extended family and friends. In addition to his beloved wife and parents, he was preceded in death by daughters, Christine Thomas and Darla Maxfield and two brothers, Arnold and Norman Maxfield.

In celebration of his life, a memorial visitation will be held at Irwin Chapel, 591 Glen Crossing Road in Glen Carbon on Saturday, January 18, 2020 from 11 a.m. until time of memorial service at 1 p.m. with Reverend Mark Maynard officiating.

Entombment will be at Sunset Hill Memorial Estates in Glen Carbon. Memorials may be made to the Pulmonary Fibrosis Foundation or the American Cancer Society and may be accepted at the funeral home. www.irwinchapel.com.

Irwin Chapel in Glen Carbonwas in charge of arrangements.