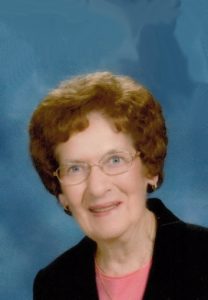 She was born on August 09, 1930, in Highland, the daughter of  Nelson and Gertrude (nee Rank) Bellm.

She was a member of St. James Catholic Church.

Betty was born in Highland and was a graduate of Highland High School.  After High School she worked on her families farm south of Highland.  After she married Leroy the purchased and operated a farm west of St. Jacob.  Betty was a farm wife and helped daily on the farm.  She and her husband loved to travel and go dancing.  The most special joy in her life was her family and spending time with her grandchildren and great grandchildren.

Visitation were held on Monday, January 13 at Spengel-Boulanger Funeral Home in Highland.

Interment was at Keystone Cemetery in Saint Jacob, IL.

Memorial contributions may be made to St. Judes Children’s Hosptial or Meals on Wheels.