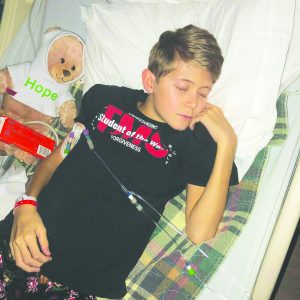 Logan rests in his bed at Cardinal Glennon Children’s Hospital between treatments for leukemia. Photo courtesy of the Kowalski Family

A week before Thanksgiving, Logan Kowalski, a seventh grader at Triad Middle School woke up achy and weak. After starting on Amoxicillin for a sinus infection, he developed a serious allergic reaction with hives all over his body.

The week after Christmas it was mono. With no improvement over the next week and doctors saying it could be months, his mom, Jennifer Butcher-Kowalski, took him to Cardinal Glennon Children’s Hospital emergency room in St. Louis for a second opinion on January 2.

Unfortunately the news was much worse than mono. More tests were needed but doctors were sure it was either lymphoma or leukemia.

His older sister Alyssa, 17, sprung into action posting on Snapchat that her brother was in the hospital while Cardinal Glennon Child Care Specialists came up to the room to tell Logan he had leukemia.

He was then rushed back downstairs for yet another scan while the rest of the family processed the news.

Kowalski was unable to speak and had messages coming in from the Snapchat post and decided to make the announcement on her Facebook page for everyone at once.

She wrote: “Facebook friends this is going to be the hardest post that I have ever had to post. Yesterday was the single worst day of my life. Yesterday our world was rocked with finding out that my son Logan, has Leukemia…In An instance I was told that he would be having bone marrow retrieval, spinal fluids removed, a pick line added and that they were starting chemo. My husband and I were immediately broken but only had minutes to process before we had to break our daughters heart and tell her and only minutes to watch her process before having to break our sons heart with what he was about to experience. To hear my little boy ask me if he was going to die is something I hope and pray none of you ever have to answer or question. We are going to begin the fight to kick Cancers ass. I am posting this because I will be needing my army of prayer warriors and friends to help us through this. Logan will be at Cardinal Glennon for his first month and is beginning treatments.”

Although prayers have been coming in from around the world, it is the love and support of those in Troy that keep the Kowalskis going.

Kowalski said that Troy took a family that was broken and is helping it heal. Triad Middle School students wore orange when they returned from winter break, and TMS Principal Matt Noyes created a t shirt with the slogan on it, “#TriadTough, No one fights alone” on it. The shirt is not just for Logan, but for every student who comes after him that faces a tragedy. The McDonald’s on 162 picked up on the slogan and placed it on their sign in support of Logan.

As a private family, the Kowalskis usually keep their struggles to themselves, but have found that learning how much the community really does care has been therapeutic. By sharing pictures of him from the hospital and keeping their prayer angels updated, Kowalski said no one will be surprised when he comes out of the hospital without his hair and with extra weight.

It will be next school year before Logan can return to school, but he is keeping up with help from teachers at Cardinal Glennon an hour a day.

Several fundraisers have already been set up to help Logan and his family, including a collection at TMS, a Go Fund Me page at https://www.gofundme.com/f/deuzg-logan-strong  and a fundraiser at Old Herald Brewery and Distillery on Sunday February 9th.

Kowalski said they had thought about moving in the fall, but something told them not to because of the Troy community being a village that cared about their kids. Now they know it is.