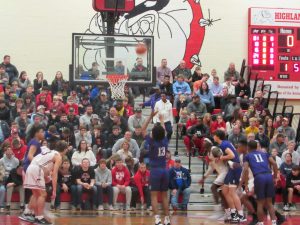 Kahok Ray ‘Sean Taylor takes a shot at the freethrow line during the game on Dec. 6. Photo by Mark Jurgena

On December 6th, with the game on the line against O’Fallon, Ray’Sean Taylor drew a triple team, passed to a wide open Cawhan Smith who buried the three from the left corner for the win.

Last Saturday, with the game on the line against DeSmet, Taylor drew a triple team, passed to a wide open Smith who buried the three from the left corner for the win.

“Ray made a good play, we put the ball in his hands and see what the defense wants to do. If they want to leave him one on one he’s gonna try to score, if they don’t he’s got to find the guy,” said coach Darin Lee.

While many in the packed gym believed Taylor would take the final shot, Taylor was one step ahead of everyone else.

“Before I started driving I saw that he was going to be open in the corner because I saw how packed in they were and I knew their big men, both of them, were going to help because they didn’t want me shooting a floater or a layup,” Taylor said.

Smith was ready for his opportunity.

“If I was open I was going to shoot it. I was confident in my shot,” Smith said.

Smith actually scored all eight CHS points in the overtime sandwiching a pair of free throws between threes from each corner.

CHS found themselves down two at the half but used a big run to take the lead.

The Kahoks began the half with a great possession that was kept alive by physical play on the boards. It eventually ended with a three by Taylor.

After a steal by Keydrian Jones, Taylor tossed a lob to Nate Hall to extend the lead.

Taylor and Hall added buckets before the run closed out with Taylor tapping in his own shot to give CHS a 36-27 lead with 3:00 to go in the third.

DeSmet closed the gap to four at the end of the quarter with the ball to begin the fourth.

They immediately got the ball to 6-9 forward Yaya Keita deep in the paint. Keita moved to the bucket to shoot but was met by Josh Chambers who took a charge to send the Kahok faithful to their feet.

What looked initially like an easy two, turned into a key defensive stop as the Spartans would outscore CHS 10-6 for the quarter to force overtime.

The presence of the 6-9 Keita and 6-10 Sekou Gassama caused problems on the boards for CHS as DeSmet won that battle 37-24. However the Kahoks had a huge advantage in the paint, outscoring the Spartans 22-10. Many of those points came from Taylor’s ability to finish around the rim.

“When you go in there you gotta know they’re trying to block it. You gotta shoot it high off the glass or try a floater,” said Taylor.

The biggest stat line may have been DeSmet’s 18 turnovers. Ten of those were steals by CHS.

The Kahoks had only eight turnovers.

The win raised the CHS record to 17-0, while DeSmet fell to 9-4. The Spartans were ranked #7 in the stlhighschoolSPORTS.com large school poll.

Early in the second. CHS was only up one and Jones had just gone to the bench with his second foul. But the Kahoks went on a quick 10-1 run, bookended by Taylor layups, which forced a Lancer timeout.

The break seemed to energize the Kahoks as they began a 12-2 run highlighted by a no look pass from Taylor to David Granger who brought the house down with a thunderous one hand slam. The play was set up by a Lorent Dzeladini steal in the open court.

The 2nd half was more of the same as CHS extended their lead to as much as 24 points midway through the 3rd period.

Taylor had a double-double with 20 points and 13 boards. He was one of four Kahoks who ended up in double figures on the night. Jones and Dzeladini had 11 while Granger added 10.

CHS outrebounded the Lancers 40-39. Granger had seven of those.

Collinsville raced to a 29-6 lead after one quarter and ran away from Cahokia at Fletcher Gym on January 7th.

Taylor was 7-11 from the floor and hit three from beyond the arc.

He filled up the stat sheet with five rebounds, four assists and four steals.

CHS outboarded Cahokia 36-29 and forced 15 turnovers,12 of which were steals.

-CHS was ranked #1 in large schools in both the STLhighschoolsports.com and the Belleville News-Democrat polls. They were ranked #3 in Class 4A by the AP.

-Taylor moved into the #6 spot on the all-time scoring list at CHS in the win over East. The layup came from the right side on an assist from Hall who had hustled to gain possession of a loose ball.

-Taylor passed CHS legend Bogie Redmon. The former All-American scored 1,714 points in his Kahok career. “To pass Bogie, one of the all-time greats, that’s quite an honor for (Taylor),” said Lee.