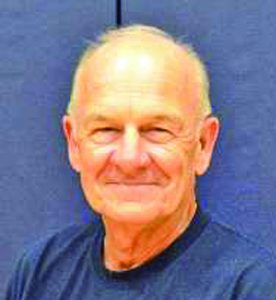 If you count those three legendary coaches as your mentors, you certainly have a leg up on the competition.

Such is the story for Steve McFall as he goes into the IBCA Hall of Fame this spring at Redbird Arena on the campus of Illinois State University in Normal.

“Those three guys just impacted me so much there’s no way I can tell you…they were just impactful people in my life,” said McFall.

McFall, a 1964 graduate of Collinsville High, was one of the last players cut his senior year. The Kahoks went 28-1 that season losing in the Salem Super-Sectional to Centralia 55-50.

However, instead of dwelling on the negative, McFall went and played in an Industrial league down in East St. Louis.

“He (Fletcher) told my dad and I both ‘I’m not keeping a senior guard on the team, but I am going to come watch Steve play.’ Because of that coach Fletcher wrote a number of letters to help me get a scholarship,” said McFall.

After some time at SIUE, he transferred to McKendree to play for Statham. He came off the bench during his time there and after a four year stint at Xenia Junior High in southeastern Illinois, he came back to McKendree to be one of Statham’s assistants.

Statham is currently the 2nd all-time winningest college basketball coach in history behind only Mike Krzyzewski of Duke.

“Vergil Fletcher and Harry were huge impacts on what I do and the way I coach,” McFall said.

When he went to McK, he needed a job and found one as a P.E. teacher at Dupo High School. He would teach P.E., World Literature, Speech, and Journalism there for 29 years.

He remained there even after moving on to coach at Collinsville.

“When I eventually left Dupo as a coach, they let me work out my schedule and create my coaching career there and I will forever be indebted to them… Bill Reynolds and Richard Bright,” said McFall.

He did serve as the head basketball coach at Dupo for six years and produced four winning seasons.

He became the baseball coach at Collinsville where he spent 17 seasons at the helm. His Kahoks had 11 winning seasons and won three regionals.

After his first baseball season, Bob Bone asked him to join his Kahok basketball staff. McFall wasn’t receptive to his offer at first until Bone gave him his reasoning.

“Steve if you don’t come coach,you’ll never see your son play if you’re going to be a coach (at Dupo),” McFall said.

“He was exactly right. My son Andy ended up playing at Collinsville and it was one of my great joys to be on the bench when Andy played.”

McFall had a great deal of praise for Bone.

“I think he’s still…he’s as good a coach as I’ve ever been around. He could take your kids or he could take his kids and he’s going to beat you with either one. He was that good a coach,” McFall said.

He was an assistant for nine years at CHS until he became the head coach for the girls program at Collinsville.

After retiring, he was brought back to coaching by Bone, now the athletic director at Clayton (Mo.) High School.

McFall was the head girls coach for three years there. The Greyhounds had two seasons of 20-plus wins and won their district crown for the first time in over 30 years.

Today he is still retired from teaching but is back in the coaching ranks.

He was hired by Maryville Christian High School to begin their athletics program. After the first year he became the basketball coach. He was reluctant to take the job until a conversation with his grandson, Carson Ahlvers, changed his mind.

“There was a discussion about whether I should be the new basketball coach and I kind of felt like maybe not. Then my grandson came and talked to me and said, ‘Grandpa I’ve wanted to play for you,’” McFall recalled.

After a conversation with his wife, she insisted that he get back into coaching basketball again.

He wanted to thank his wife, his children and grandchildren for their support through the years. He also mentioned current CHS girls coach Lori Billy and Andy Knapp. Knapp played on his first basketball team at Xenia and became a coach at Flora.

What they say about McFall:

-“He demands excellence and he wants the kids to be successful and he’s got a plan that he follows and it’s successful for him. He’s a great guy. He’s like a big brother and a mentor and a family member all wrapped into one for me,” said  Lori Billy head coach Collinsville girls basketball.

“When you hear Coach McFall and Coach Parker’s names you can’t help to think about the Kahoks. I had the opportunity having both of those gentlemen coach me in my HS basketball career as a Kahok. Both are very deserving of this Hall of Fame induction. They have done and continue to do great things for the game of basketball and athletes both on and off the court,” said Clay Smith Collinsville Athletic Director.