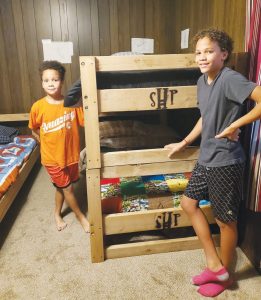 A little over a year ago, Jim and Karen Sprinkle, of Maryville, were watching Mike Rowe’s television show Return the Favor and learned about a charity out of Idaho that builds beds for families in need.

That group, Sleep In Heavenly Peace was started in 2012 by Luke Mickelson of Twin Falls, Idaho to fill the void left by other charities. SHP now has 183 chapters in 44 states and 3 countries.

The Sprinkles went to Idaho in March of last year for a weekend to do their training and completed an initial build (that can be separated into single beds) with just their 15 core volunteers.

Their first build of 5 bunk beds was completed at their facility in Fairview Heights in May as the Sleep In Heavenly Peace Illinois Metro East Chapter on the Saturday of Memorial Day weekend.

The Metro East Chapter was the first chapter started on either side of the river for the St. Louis metropolitan area.

By the end of 2019, SHP Illinois Metro East Chapter and its volunteers with the help of various community groups built and delivered 108 bunk beds to families all over the Metro East, including 10 to Collinsville families and 10 to families in Troy.

Volunteers are provided with face masks, goggles, and ear plugs if desired and do not have to have previous power tool experience.

The total cost to build a bunk bed is $350 and covers lumber, mattresses, lag bolts and bedding. When the beds are delivered they are assembled, made and usually have excited children laying on them immediately. Sponsorships are available at a chapter and national level by visiting the website listed at the bottom of the article.

The chapter’s first community build was held on January 18 at the Edwardsville High School Sports Complex with 30 volunteers from the Edwardsville Rotary and members of the EHS Interact Club, which is the youth arm of the Rotary.

Interact Club President Elizabeth Viox, of Glen Carbon, said she loves to see the members of her club come out to help the bigger cause. A total of 20 beds were built in the 3 hour event with the Rotary members going on the delivery of three bunk beds to two families in Granite City.

Most of their requests come from Granite City and East St. Louis, but they service all of Madison County south of Alton and all of St. Clair County.

To request a bed, go to www.SHPbeds.org. Volunteers are asked to sign up by sending a message through the chapter’s Facebook page.