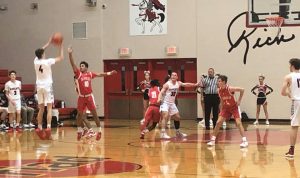 Senior Luke Cox takes a jump shot for three against the Centralia Orphans. Cox has been the key piece to Triad’s offense all season long. (Photo by Anthony Jones)

The Triad Knights entered last week on a three game winning streak and had not lost a game since late December. Triad had matchups with the Centralia Orphans(15-3) and Mt. Zion Braves(3-14). The matchup with the Braves was in the opening round of the Rick McGraw Memorial Invitational in Litchfield.

The week opened with a hosting of Centralia on Tuesday night. Centralia jumped to an early 17-8 lead. At the end of the opening quarter, the visitors expanded their lead to 22-12.

The Knights were dominated in the starting of the second quarter as there opponents went on an 11-2 run. Triad did manage to score the final points of the half to draw the game closer at 33-19. Triad’s high scorer for the half was Luke Cox with 7 points.

The fourth quarter belonged to the Orphans, who won 60-43. Cox led Triad with 18 points and Nate Winslow added on 13 of his own against the highly skilled Orphans.

On Saturday, the Knights traveled to Litchfield for the Rick McGraw Memorial Invitational. The Knights are the number one seed of the twelve teams participating in that tournament. Their first game came on Saturday against the Mount Zion Braves.

Triad kicked off the game in dominant fashion. This led them to a 23-5 lead at the end of the first quarter, with 18 points from Cox alone.

The second quarter proved to be more competitive. However, the Knights still managed to extend their lead to 41-18, which almost passed their total for the previous game.

The Knights kept their offense rolling in the second half. At the end of the third quarter, they lead 63-31. Cox moved his total up to 33 points on the day in that period.

The fourth quarter saw both teams slow down the scoring pace. Triad managed to leave with a 72-31 victory to move to 13-5 on the season. The Knights will finish the tournament over the next week and will host the highly touted Collinsville Kahoks on January 28.