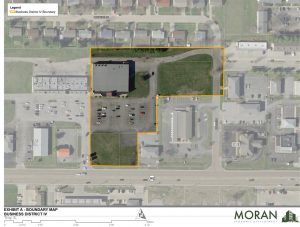 Troy officials and council members are working toward the formation of a new business district that includes the site of the old Schuette’s Market on Edwardsville Road, in an effort to spur economic development in the area.

Although bankruptcy documents indicate the Schuette’s property has been sold to the owners of the 4-0 Quick Shop in Troy, details of exactly what will be done with it remain undisclosed

A public hearing is scheduled for Tuesday, Feb. 18, at 7 p.m. about the Troy Business District IV proposal.

According to a schedule of events pertaining to the plan, required public notices will be published twice beforehand, as required by law. At the upcoming Feb. 3 city council meeting, the council is expected to be presented with a “Blight Analysis & Business Development District Plan,” and will be asking for approval of the scheduled hearing date, with formal adoption of a business district plan ordinance scheduled to be considered at the council’s March 2 meeting.

Members of the Finance and Economic Development Committee were given an update on the business district adoption schedule at a meeting immediately preceding the Jan. 21 council meeting.

Also discussed at the committee meeting, and approved by the full council afterwards, was a supplemental tourism grant request by the Troy/Maryville/St. Jacob/Marine Chamber of Commerce for the Jim Welch Classic, at a cost of $10,000.

Other supplemental tourism requests that were approved included $8,000 for a 2020 postcard mailing; and $750 for the Silver Creek Rotary Club for billboard advertising. The Rotary Club was given $3,170 last year to help with costs for  the Kelly Miller Circus, but because the circus was cancelled the group said in a letter to Finance Committee Chair Nathan Henderson that they were returning the money to the city. Also approved: $1,300 for one Chamber billboard listing; $100 for a Creating Business Connections sponsorship; $6,500 for a Career/Volunteer Fair; $2,000 for a Destroy Hate Campaign;  $500 for a car wrap for a Chamber vehicle; and $1,000 for digital media/marketing.

• Aldermen voted to move forward with a supplemental tourism request for the Triad High School Turf Field Project in the amount of $10,000, with the requirement that the support be reviewed annually before committing to further donations.

• Alderman voted to support the city’s application for another grant through the Metro East Park and Recreation District’s Community Planning Grant Program for FY20.