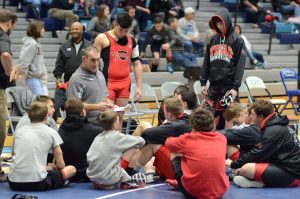 -The Mars Lander was launched

After beating Waterloo in the final match of the MVC Super Duals at Highland, the Knights kept that streak alive.

“It never gets old… especially this year going into the season with Mascoutah and CM (being favored)…there’s a lot that goes into a year as far as attrition…our kids came through. 13 in a row is great!” said coach Russ Witzig.

Triad began the day with a win over Highland 54-21.

Chase Hall, Jackson Hampton and Jordan Clines all won their match on points.

“That started off our day, we wrestled well and just seemed to continue from that dual on,” Witzig said.

Triad squared off with Jerseyville and came away with a 61-3 win.

“Miguel Estep wrestled well that match. He beat a kid that had beaten him earlier in the year and our kids just kept it going,” said Witzig.

Jersey would finish in 2nd place with a 4-1 record.

“I really thought this was going to be a tight match. On paper I had either team winning by 3-9 points. Our kids wrestled tough,” Witzig said.

“We flip flopped him (Zawodniak) and Hall. He beat a kid (Brenan Wadlow) that it was a pretty close match but he grinded the whole match out and at the time it was a big turning point in the dual,” said Witzig.

Triad battled a tough Civic Memorial squad and came out on top with a 48-36 win.

The final match was a 66-15 win over Waterloo. The Knights won 11 matches by pinfall.

Hall, Postma, Estep, and Bakarich got their second pin of the day.

“I thought we were favored but I didn’t anticipate the score being what it was,” said Witzig.

A side note to the day. Triad’s Bakarich bumped up to the 160 lb. class in order to help Triad claim the conference title.

In the Jerseyville dual he met the 2nd ranked wrestler in Illinois Class 2A, Zeke Waltz. Waltz won by decision 4-2. It was Bakarich’s initial loss of the season. He stands at 32-1 on the year.

“Garrett wrestled a tough match against that kid, he just made a couple of mistakes. When you wrestle a top level kid like he is, one mistake is all it takes to win or lose a match. It was a match he needed, he’s not been challenged except a couple times all season,” Witzig said.

Triad wrestles in the Mascoutah Individual Regional this weekend.

-He now has overseen 404 dual wins in 27 years as the head coach of Triad.

-According to Witzig, that 2007 MVC champ was Mascoutah. 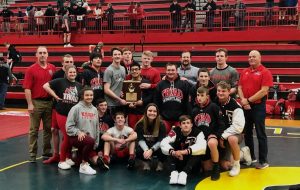