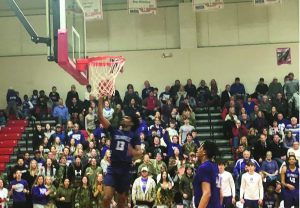 Ray’Sean Taylor jumps for a dunk during a recent game at Triad High School. Taylor has been a focal point for the Kahoks on offense and defense in his senior year. Photo by Anthony Jones

One night after suffering their first loss of the season Collinsville took out their frustrations defensively by allowing Normal Community only 21 total points from the field in a 54-35 win.

“We guarded pretty well. They really couldn’t get anything going with their offense. We just didn’t give them any easy buckets,” said coach Darin Lee.

“To limit our fast breaks they sent a lot of guys back. So obviously we don’t get as many fast breaks but they didn’t get too many offensive rebounds either,” said Lee.

The Kahoks staked themselves to a 20-12 lead at half on the strength of a late 8-0 run thanks to two buckets each by Cawhan Smith and Ray’Sean Taylor.

The defense held the Ironmen to 29% shooting for the half. The Kahoks won the turnover battle 7-1.

The second half saw a return to form for CHS as they shot out of the locker room on an 8-3 run compliments of Taylor.

He scored on a backdoor cut and bounce pass from Nate Hall 15 seconds into the half.

Taylor hit an 18 foot jumper off the dribble, then forced a turnover with pressure defense. Lorent Dzeladini came up with the steal and got it to Taylor for a layup to make it 26-13 CHS.

Finally Taylor hit another 18 foot jumper off the bounce, this time of the fade away variety to put CHS up 15 points.

Normal made only one field goal during the quarter.

The Kahoks would push their lead to as many as 19 points in the final stanza.

Taylor led the Kahoks with 28 points and four assists. He also took his ninth charge of the season on defense.

Keydrian Jones had 14 points and led in rebounds with nine.

Taylor and Hall had five boards each.

O’Fallon used a patient offense and great defense to drop Collinsville to 22-1 by beating the Kahoks 55-41 last Friday in O’Fallon.

The Panthers shot 52% from the field while the Kahoks only managed 27%.

“You’re not going to win very many games with those kinds of shooting percentages. I really thought defensively we did all right in the first half. I think when we got behind we probably gambled a little too much and gave them some easier buckets. But offensively we just didn’t shoot it very well,” said Lee.

Even more telling than the field goal percentage differential was rebounding. CHS won that battle 33-32 however they got killed on the defensive glass 28-14.

“We missed a lot of shots for them to rebound. But our defensive glass… we’ve got to get better. We still have to be more consistent getting defensive rebounds,” Lee said.

Collinsville crept to within four when Smith hit a three at the 3:47 mark of the 4th, but O’Fallon closed out the game on a 12-2 run including 8-10 from the line.

The game was an offensive struggle from the start as the Kahoks only managed to go 2-10 from the field in the first and fell behind 7-6.