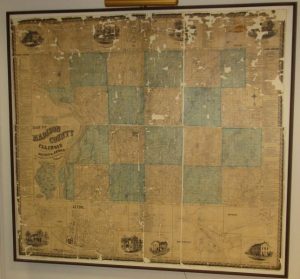 Liberty Street is a long, winding roadway with no sidewalks that branches off from the car wash on Edwardsville’s North Main Street across the street from where Rusty’s restaurant used to be.

After the last of the houses in the 700 block, past the final businesses with no trespassing signs posted on their parking lots in the 500s and through the wooded road in the 400s and 300s, it finally ends with an iron barrier that stretches across the path near the 200s, also posted with a no trespassing sign. Beyond that, at 100 where it ends, a historical marker used to be.

Placed in 1934 and long reported missing, it was believed to have held the answer to one of the county’s many historical questions.

Where exactly was Fort Russell?

It would have been hard to miss during the summer of 1812. It was the largest and best equipped of 22 blockhouse forts built in the region by Illinois Territory Governor Ninian Edwards to stave off possible attacks by hostile Indians during the War of 1812.

It was protected by five cannons sent all the way up from Fort des Chartres in Randolph County (one soon exploded) and by 35 Illinois Territory Rangers. These lived in barracks, met in a headquarters building with Edwards and stored their supplies in yet another building. It was all surrounded by a fence. The fort even sent two expeditions to Peoria on war-related business.

It soon closed (the war was over), burned down in 1837 and by 1840, all traces of it were gone. The wood was believed to have been used for area houses, the cannons sold for scrap. Nobody was really interested in it until 1912, the county’s centennial. By then all of the people who could remember the fort were gone. So the county put up a flagpole – in the wrong location, of course.

Interest in Fort Russell began to grow. Seventh- and eighth-grade students at a Wood River elementary school built a model of it in 1925 that became one of the most popular artifacts at the Madison County History Museum. In the 1930s, a state park was proposed because of the fort’s historical significance. That idea failed because nobody knew exactly where it should be. But a historical marker was set up. Its accuracy has been questioned over the years.

“I remember where the original marker was and it was probably within a mile or two of where the fort was,” said  Mary Westerhold, recently retired as archival research manager at the Madison County Archival Library.

“The terrain has changed so much as far as homes being built, lands being farmed, trees cut down, new trees being planted,” she said. “It’s so different than it was when the fort was there. Everyone agrees that by 1840 all traces of the fort were gone.  It’s something that wasn’t there very long and it’s so difficult to find because of the changes in the area.”

Some of the interest in the fort, Westerhold said, is curiosity. The Madison County Archival Library has a large file on Fort Russell for visitors who want to know where it was. It’s a frequently asked question, she said  in an earlier interview.

“It’s not one we can provide a good answer to” she said. “We say, ‘Let us know if you find it because it’s not yet been completely determined.’’’

Interested parties keep on searching locations northwest of Edwardsville (Is it in two back yards on Springfield Drive, just off Illinois Route 159? Near the old flagpole site? Is it under my patio?). They’re fueled by historical motives. Fueled by the romance of finding a lost fort. Fueled by rumors of treasure buried nearby, like gold from the Army payroll, old weapons and even silver that the government was supposed to pay the Kickapoo Indians who lived in the area.

Local historian C.E. Bristow searched with a tungsten magnetic dipping needle and a radio in 1933. No records of the results have been found. Representative Melvin Price requested that the National Archives search their records in 1958. No significant documents were found. An archaeology class led by professor Ted Frisbie of Southern Illinois University Edwardsville searched the flagpole site during the summer of 1979. The most valuable results were finding some lost marbles and a historically sound and hysterically funny term paper written about the search by one of the students. That is now in the thick file marked “Fort Russell” at the county museum’s archival library.

The Illinois Bicentennial Commission of the War of 1812 looked into it. So did Southern Illinois University Edwardsville professor Greg Vogel who, led by a 1941 aerial photograph, planned to use remote sensing technology to see below the ground’s surface, in 2012. They made the local newspapers. But their results did not. There have many searches since then with little or no reported results.

One of the reasons we never hear the results of these findings is because the searchers often do not share that information,Westerhold said.

Despite clues like pieces of old weapons unearthed in the general area, the county’s mystery fort may never be found. And if it was, we may never hear about it if the finder chooses not to share the results with us.