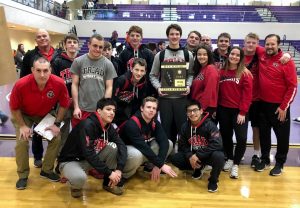 The Triad wrestling team got key contributions up and down the lineup Saturday to take the crown at the IHSA Class 2A Individual Regional in Mascoutah.

“You don’t win tournaments with your champs, everybody’s going to have champs. You win it with your wrestle back kids from the losers brackets,” coach Russ Witzig said.

Triad had five wrestlers place fourth and got key points from another to overcome the Comanches.

“Those kids battled through the losers brackets and earned a ton of bonus points that allowed us to win as a team. Those guys are unsung heroes,” said Witzig.

Landon Tourville also picked up key points to help the cause.

“He’s a first year wrestler that hasn’t wrestled much this year. He got a pin in the consolation bracket which was a three point pin. When you look at the big picture and we only win by three and he gets a three point pin in that losers bracket, even though he didn’t place…huge!” Witzig said.

The Knights did claim three individual crowns on the day.

“They did what they were supposed to do. They pinned their way through the tournament which was huge! Those guys came out and got after it,” said Witzig. 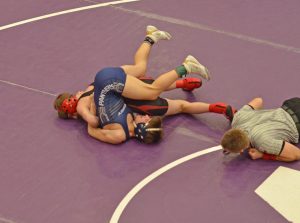 Hall won the 113 lb. class to push his record to 31-6 on the year. He beat Gavin Hearren of Waterloo for the title.

He beat Chase Overton of Mascoutah.

“He had a tough kid in the finals that was ranked at 145. Bakarich has pinned him every time so to pin him again was a pretty big deal,” Witzig said.

“He’s just been pretty consistent for us in tournaments this year. When it came down to his match I told him getting bonus points here was pretty important in the finals because we were tied at the time. He ended up pinning the kid,” said Witzig.

North defeated Cole Glowacki of Waterloo in the final.

All three are returning state qualifiers.

“Kaden wrestled up to his seed. He improved, but in the finals he had the 2nd ranked kid in the state and the kid had beaten him twice this year already. But Kaden is only a sophomore. I felt like he had another great day. He has an outside shot to get to the state tournament. He’s just got to believe he can do it,” said Witzig.

He fell to Cahokia’s Arnold Edwards. Edwards is 37-3 this year.

“Really that last match where he pinned the Mascoutah kid (Jacob Pflasterer), I felt like it was a really big win. I was just hoping we could win it but to get bonus points out of it…really was another thing that pushed us over the top at the end,” Witzig said.