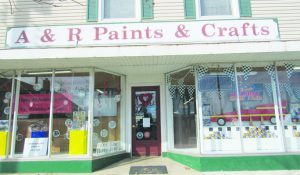 In 1980, Ron and Carol Klaustermeier purchased the store located in the 1800s building owned by the Oddfellows Lodge at 201 S. Main St in Troy.

Originally opened as a gift shop in 1952, the store had expanded to gifts, crafts, paint and wall paper when the Klaustermeiers purchased it. Times changed, and the paint and wall paper were replaced by boy scout supplies and Melissa & Doug educational toys, which have gained in popularity with expanded offerings in recent years.

Over the last 40 years, the Klaustermeiers have seen a lot of changes in downtown Troy with fewer businesses and stores. Inventory wise, model trains have seen peaks and valleys in popularity, but plastic models have had consistent sales over the long haul. He hopes that trains will make a comeback, as they are the perfect hobby for those interested in STEM fields of science, technology, engineering and math.

And although the business changes, it also stays the same according to Ron Klaustermeier. Parents that use to come in with their parents are now bringing their children in, occasionally asking if a toy or model from their childhood is still available.

Scouts. He says with so much bad in the world there needs to be something good and the Boy Scouts fill that need.

A&R also serves as a place to purchase clothing and make monetary donations for the animal rescue group Partners for Pets in St. Jacob.

On February  21 and 22 A&R will be having their anniversary celebration during regular business hours with refreshments and door prizes.