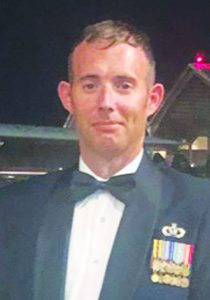 Upon graduating from Triad High School (2002), Nate enlisted in the United States Air Force. Over the past 18 years he proudly served completing 9 combat and 2 humanitarian deployments which landed him in the countries of Iraq, Kuwait, Jordan, Afghanistan, Suriname, and Panama. When not deployed, his time in service found him stationed at Davis Monthan AFB, Arizona, Nellis AFB, Nevada, Kunsan AFB, Republic of Korea, and Whiteman AFB, Missouri; with additional duty assignments in Yuma, Arizona and Joint Base Elmendorf Richardson, Alaska.  Throughout his time with the USAF, Nate received many decorations and medals; however, he was most proud of his work as part of the humanitarian missions (building clinics, schools and playgrounds) and his time spent volunteering with charitable organizations such as the Wounded Warrior Project, Nevada Special Olympics, Habitat for Humanity and the Muscular Dystrophy Association.

Beyond all else, though, Nathaniel was a dedicated family man; loving husband to Amada, and proud father to Jason and Kaylie.

He was preceded in death by his father, Dennis Alvis; grandparents, William Klausing and Cleo and Mabel Alvis.

Memorials may be made to Nathaniel’s Children for their Education Fund or St. Paul’s Lutheran Church, Troy, IL.  Online expressions of sympathy may be made at www.Richesonfh.com

Richeson Funeral Home, Troy, was in charge of the arrangements