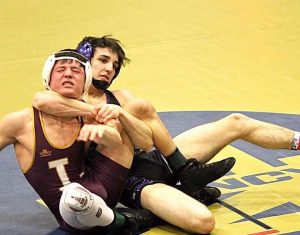 Joe Biciocchi and Jalen May both finished in 4th place at last weekend’s IHSA Class 3A Quincy Sectional wrestling tournament.

The pair will advance to the state tournament beginning today at the University of Illinois in Champaign.

He began his tournament by pinning Gio Spatafora of Naperville Neuqua Valley at the 5:49 mark.

Biciocchi fell in this second match to Noah Tapia of Moline on a 8-5 decision.

“That was a winnable match, we just didn’t stay on our offense on our feet. That kid really stayed on his offense,” said coach Joe Bevis.

In the wrestlebacks he beat Edwardsville’s Zeke Rhoads with a pin at the 4:48 mark.

“Early in the season this started out as a close match, then the regional finals we opened up the gap a little bit. Joe went out and wrestled with a ton of confidence this time and he controlled the match from beginning to end. He wrestled a very tough match,” said Bevis.

In the 3rd place match he lost to Jacob Macatanday of Plainfield North by a major decision 14-2.

He began with a 10-0 major decision over Carlos Munoz-Flores of Lockport and continued his success with a 7-1 decision over Andres Russo of Joliet West.

In his semifinal, he fell to Joey Roti of Tinkey Park Andrew 3-1.

May was then forced into the wrestle back where he made quick work of Austin Spacht of Bradley Bourbonnais by pinning him at the 1:08 mark.

“We were very concerned about Spacht because we knew he could be very physical. Once again Jalen comes out, he opens up his offense, gets a real big takedown. We felt like he was getting a little high so May slapped in a cradle. He did not want to wrestle any longer that match. He got that cradle locked in tight. He was bound and determined to go to state,” said Bevis.

In the 3rd place match he fell in a major decision to Vincent Robinson of Chicago Heights Marian 13-3.

May’s 46 wins in a season puts him one behind Jevon Pargo’s record of 47 wins.

Garrett Lee, Drew Evans and Kenny Lutz were unable to qualify out of the sectional.

“Any time you have a senior who’s season ends it’s tough. All three of those guys are seniors. They all three wrestled extremely tough this weekend,” Bevis said.

In the wrestlebacks he beat Tyrece Wilbourn if Belleville West in sudden victory.

“(After the loss) he turns around against the kid from Belleville West and followed the plan,” said Bevis.

In the quarterfinals he fell to Brock Pfeifer (34-8) of New Lenox Lincoln Way West by pin at 1:34.

He also was defeated by Joe Oster of Lockport via pinfall at :39.

In the quarterfinals he lost by a razor thin 6-5 margin to Haku Watson-Castro (27-9) of Homewood-Flossmoor 6-5.

He bounced back with a 5-2 decision over Liam McDermott of New Lenox Providence.

Finally he was tech falled by DeAnthony Parker of Moline 15-0. Parker (40-5) went on to place third.

“The kid was just a whirlwind of constant motion and movement. Unfortunately Kenny just couldn’t slow him down,” said Bevis.

Parker was actually a ranked wrestler in the 170 lb class who bumped up for the postseason.

“That 182 lb class was stacked,” began Bevis. “ There’s some good wrestlers that are not at the state tournament. Kenny Lutz being one of them, the kid from Homewood-Flossmoor that beat Kenny another one of them. Caleb Harrold from Edwardsville is not going. Those are three really good wrestlers that very well could’ve ended up on the podium at state.”