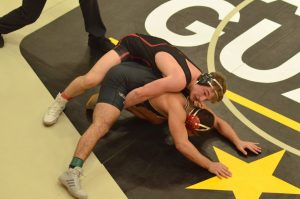 Garrett Bakarich, Kaden Marmon and Collin North all qualified out of last weekend’s IHSA Class 2A Mascoutah Sectional and onto the state tournament beginning today in Champaign.

“Garrett looked great yesterday especially in the finals. The kid that he beat in the finals was a two time state placer already, he looked pretty dominant throughout the whole match,” said coach Russ Witzig.

Bakarich (39-1) qualified for state for the fourth time by winning the individual sectional title in the 152 lb. class.

In the title bout he outpointed Aron Taylor of Carbondale 8-3.

After receiving a bye in the opening round, he beat Eliseo Perez of Danville with a pin at 1:53.

In the semifinal, he defeated Hayden Stanley of Mattoon.

“Probably his toughest match was in the semis where he only won 6-2 but that kid’s a returning state place winner too. So he beat a couple of state place winners in winning sectionals so that sets him up really good at the state tournament as far as his first round,” said Witzig.

“I always thought he had the potential to get out this year, I don’t know if he did all the time but he put it all together and he knocked off two pretty good kids,” Witzig said.

He began the tourney by pinning Owen Gray of Morton at the 3:18 mark.

In his second match he was beaten by River Flute (44-4) of Marion in a major decision 14-4. Flute ended losing in the title match by two points.

The Triad sophomore went into the consolation wrestle backs where he pinned Chris Yates of Springfield Southeast at the 3:50 mark and Jake Rush of Bloomington at 1:44.

He went on to beat Omar Nasser of Carbondale 3-1 to reach the 3rd place match where he beat Ripperda.

According to Witzig, Ripperda was a state qualifier last year and Nasser was ranked in the top ten at one point this season.

“He just wrestled tough and grinded out some close matches. I thought going in he was one of our kids who had a shot. He wasn’t one of our favorites but he came through in a big way,” said Witzig.

This was his first time qualifying for state.

He lost his initial match of the tournament to Daniel Renshaw of Mahomet-Seymour 4-2.

“He (North) was kind of upset about it, but it really set him up to be in a better spot. He wrestled really well through the wrestle backs,” Witzig commented.

After advancing due to an injury by a wrestler from Cahokia, he pinned Andre Hunt of Urbana in :48. That win set him up with fellow MVC wrestler Cole Glowacki of Waterloo. North scored a major decision 13-4.

In the 3rd place match he met Renshaw of M-S again but fell 4-0.

“I really thought he outwrestled that kid both matches. He just didn’t capitalize on a couple of scoring attempts,” Witzig said.

He was unable to continue into the next round due to an injury.

“I really thought Hall would get out, there were five really good kids there including him. That was a tough weight. He got dinged up in the first match. I felt bad for him. He had beaten one or two of those guys already. I hope he comes back healthy for our team dual because we’re really going to need it,” Witzig said.

He lost to Trey Pearcy of Charleston 8-3 in his opening match. Pearcy would go on to a third place finish.

After receiving a bye, he pulled an upset by defeating Collin Reif of Jacksonville 10-6. Reif was listed as honorable mention in the state rankings at 126.

His final match was a 6-2 loss to Logan Blackburn of Mattoon.

“For a freshman getting there that’s a pretty good accomplishment. He was right in all these matches. As a young guy he’s just got to believe in himself a little more. I felt like overall he wrestled well,” said Witzig.

Finally Everett Walsh (22-17) had qualified as an alternate and was given the opportunity to wrestle in the heavyweight class.

He won his opening match over Wesley Gadberg of Centralia by pin at 2:17.

He bounced back by pinning Lucas Flavin of Chatham-Glenwood at the 4:20 mark.

His last match was a loss to Jake Bennington of Lincoln by pinfall at the 2:52 mark.

“He had a little bit of luck on his side. He got into sectional as an alternate. I really felt like even though he was an alternate he had a shot to get out. I think for him to come out and not even know he was going to wrestle that day, get the call to wrestle and then winning two matches was an accomplishment for him,” said Witzig.