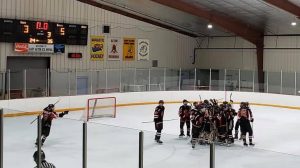 The Triad Knights moved on to the MVCHA Class 1A championship series last week after winning game three of their series over Alton 5-3 at the East Alton Ice Rink on February 20th.

Triad jumped out to a 3-0 lead on the Redbirds with Alton breaking their scoring drought with :12 to play in the 2nd period.

Andrew Watts scored 1:35 into the game to get Triad off on the right foot. The assist was credited to Zack Davis.

Four minutes later the Knights staked themselves to a 2-0 margin on the strength of a Daniel Verhaar goal. Elliot McAtee and Jordan Lewis registered assists.

Watts again found the back of the net late in the 2nd period courtesy of a pass from Boston Betz.

Early in the 3rd period, Frankie Rynes scored an unassisted goal to go up 4-1.

After two Alton goals, Davis ended the scoring with an unassisted goal for the final margin.

Logan Teater was in goal for the Knights.

The February 18th contest saw the Redbirds score late in the first period to break the scoring ice.

But Triad roared back with four goals in the 2nd period.

Davis and Watts teamed up to tie the score at the 12:31 mark on a short handed goal.

At 7:27, the duo reversed roles as Watts scored on an assist from Davis.

Paige Stelzer continued her playoff scoring run with a goal just inside of four minutes to play. Verhaar and Betz contributed assists.

Finally, McFarland scored a shorthanded goal midway through the third to complete the scoring.

Teater was in goal for the Knights.

“Our team was ready. We had a tough 1st period as we fought back and forth with Alton striking first. The second period was all Triad as we scored four and added a 5th in the third period. We outshot Alton 44-14 and got another strong night from Ethan McFarland,” said Triad club hockey president Mike Rynes.

The Knights opened their semifinal series with a 4-3 loss February 17th at East Alton.

Triad jumped out early at the 6:42 mark of the 1st period with a goal by Davis. The assist went to Watts.

Alton scored two early goals in the 2nd period, but the Knights came back at the 6:46 mark with a goal by McFarland. He was assisted by Lewis.

The Redbirds picked up a late goal in the second period to take the lead.

They scored again with 5:16 left in the third period.

McFarland closed the scoring with a goal at 2:21 of the third. Lewis and Watts were credited with assists.

“We out shot them 38-27 but Alton has an awesome goalie. Alton also has the reputation for being a hard checking team and lived up to it. But hard checking usually brings penalties which it did for them, unfortunately we just couldn’t capitalize on the numerous power plays. Tonight will be a different story, we will be ready for their strong game and pull out the win in this do or die game,” Rynes said before game two.