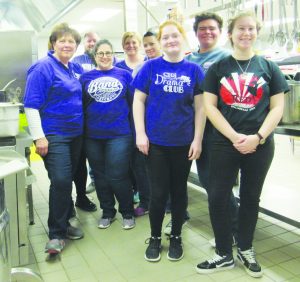 Wright is the granddaughter of Vito Viviano who ran the iconic Main St. Viviano grocery store across from the Miner’s Theatre. She learned to cook from her grandma Philipina who lived to be 102, her aunt and her mom.

Wright began making the sauce for the band’s Spaghetti Dinner and booth at Italian Fest when her son Bobby, now the band director at CHS, started attending the high school. Years before that, Wright’s Uncle Joe was in charge of making the pasta sauce for the spaghetti dinners that have been going on for 60 years.

When asked for the recipe she uses for the sauce, Wright says “I can’t tell you. I don’t measure.”

Preparations for the Annual Spaghetti dinner begin the weekend before with the preparation of 125 gallons of the spaghetti sauce. Because this year’s spaghetti dinner fell during Lent (February 28), a vegetable lug was also available for diners. This was also the first time in the history of the fundraiser that it is being held at the high school.

Money for this year’s fundraisers will help with the purchase of new marching band uniforms, tuxedos, and concert dresses for the expanding program.