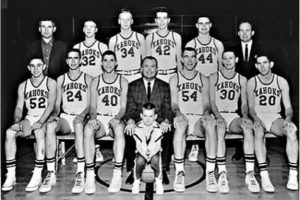 NOTE: Due to the suspension of so many aspects of life from the COVID-19 pandemic, we have decided to take a look back into the history of Collinsville sports. This week’s article was suggested by current Collinsville coach Darin Lee. It is about the classic 1961 Salem Super-Sectional game between #1 ranked Collinsville and #2 Centralia. The game was played March 14, 1961.

“If anybody doesn’t believe we can win the Southwest Conference or the state of Illinois titles, leave right now,”-Vergil Fletcher, 1960 as told by Bogie Redmon March 18, 2020.

Those were the initial words by coach Fletcher at the first basketball practice of the 1960-61 season.

“Three of the guys on the basketball team played football. We played East St. Louis (one) night, coach Fletcher had basketball practice (the next) morning. So right off the bat he laid the law down and we all knew we had a mission,” said Redmon last week.

The Kahoks suffered their only loss of the football season to the Flyers 21-13 in that game. That would be the only loss Redmon, Fred Riddle and Bob Meadows would have through the fall and winter at Collinsville High.

They raced through the basketball regular season undefeated at 23-0.

However, the perfect regular season had adversity. Redmon, the 6-6 center for the Kahoks broke his leg and missed part of the season. Even that was merely a bump in the road.

“I think on a Wednesday or Thursday night practice I came down on one of my  teammates’ foot and I split the tibia bone. My tibia bone had maybe an inch or so split. I missed nine games. Coach Fletcher put in Ron Mottin, my back up and he did a great job. I think that was one of the things that made us a team,” said Redmon.

The Kahoks had only two regular season games decided by less than ten points. A 78-75 overtime win over Litchfield in the championship of the Collinsville pre-Christmas tourney and a 74-71 SWC win at Edwardsville which was the 1,000th in CHS history. During both of those games the All-American Redmon did not play.

Not only did the Litchfield game show the Kahoks could win without Redmon, it was significant on defense as well. Up to that point, Riddle indicated that CHS employed a 1-2-2 quarter court defense with the point man stationed at the top of the key.

“We came in at halftime and we’re down and coach Fletcher didn’t come in and didn’t come in…then finally they came in and said, ‘three minutes to go,’ and he still wasn’t in the locker room. Just about that time he came in and all of a sudden he hit the chalkboard and it shattered. This was totally out of context for him. He turned around and said, ‘I’m sick and tired of seeing the way you guys are playing! You guys are going to go out there and full court press the rest of this game!’” said Riddle last weekend.

Coach Fletcher went on to make it clear that the five players on the floor were not coming out of the game regardless of what happened, according to Riddle.

“We went out and that was the beginning of the Collinsville press,” Riddle said.

According to the Alton Evening Telegraph the following day, the Kahoks outscored Litchfield 31-21 in the 3rd quarter. After an even final stanza, Bob Simpson scored four points in overtime for Collinsville with Bob Basola hitting two free throws for the final tally.

In the postseason, they scored a nine-point win over Madison in the semifinals at the Granite City Regional before beating the host for the crown.

At the IHSA Sectional in Wood River they blasted Jerseyville and, for the fourth time that season, beat Litchfield to win the sectional and move to 28-0. The Purple Panthers lost four games total that season.

“I felt so sorry for those guys because the first time we played them we only beat them by three points. Then the second and third, I think it was a little more each time. Then when we played them in the sectional final in Wood River, we beat them pretty badly. That was great for us, but tough on them,” Redmon said.

That title win by CHS gave so many high school fans the matchup they had been waiting all season for: Collinsville vs. Centralia.

“These two teams were ranked number 1 and 2 in the 1961 final state poll,” began current Kahok coach Darin Lee. “Centralia was the winningest team in the state and had won three state championships, so they had great tradition and fan following.

“I think many people felt the winner of this game would win the state championship.”

The gym at Salem held a capacity of 4,000 people and with a matchup this large, scalping of tickets was reported.

“People have said they were scalping tickets for $100 bucks which in those days was unheard of,” Riddle said.

In Centralia, the Mt. Vernon Register-News reported scalpers were selling tickets for between $25-$40, upwards of 40 times what tickets for Super-Sectionals across the state cost.

However, not everyone was looking ahead to the matchup.

“Starting with the week before, after we did regionals, I quit reading the paper, because I didn’t want to have any preconceived notions about anybody. I just was thinking about playing the game, do what we could do, everybody just play your position and do what they can do. Truthfully that’s all I was thinking about,” said Redmon.

The game began with both teams applying the press and the Kahoks took a 24-21 lead after the 1st quarter.

However, the Orphans ripped off an 8-0 run to begin the 2nd quarter and take a 29-24 lead. That five point margin was their largest of the game.

Collinsville came right back with a 7-0 run to take the lead.

During the scoring spree, Basola began with a putback and Redmon followed with an inside bucket. Simpson scored a basket on the fast break and Basola knocked down a free throw to complete the run.

Redmon and Riddle had combined to score 26 points in the opening half.

Centralia’s 6-6 center Richard Rapp had been neutralized inside by the 6-6 Redmon, however Rapp still tossed in 15 points in the half mostly on outside shots from both corners.

After three periods the score was knotted at 54.

The two teams matched buckets throughout the early and middle part of the quarter with Centralia stars Ken Coleman and Chuck Garrett hitting baskets that were answered by Redmon and Basola.

When Basola hit a driving layup, the Kahoks went up 62-60 and Simpson hit a free throw to give CHS a three-point lead.

Coleman hit another bucket for the Orphans to cut it to 63-62 but then disaster almost struck Collinsville, a turnover on the inbounds pass gave Centralia the opportunity to take the lead.

“We weren’t very prone to turnovers,” said Riddle. “A lot of people never realized that in practice Fletch would have us, when we were on offense, he’d have the second five press us, except the second five would be composed of anywhere between seven to ten people. So generally if somebody tried to press us we’d just start smiling because we knew we could handle that. That’s why I say Centralia was really good.”

“I’d do it again,” Centralia coach Bill Davies told the Southern Illinoisan after the loss.

The Orphans called a time out with 2:25 to go and went into a four corners stall. For their part, the Kahoks pressured Centralia instead of letting them stand with the ball.

“We were still going to use the 1-2-2 trap so wherever the ball went we were running after the ball especially Meadows whose job was to run after the ball,” Riddle said.

Centralia would take another timeout at the :59 mark to discuss their last second plan.

“They were putting pressure on both Garrett and Coleman and were overloading their defense trying to get the ball,” Davies told the Southern Illinoisan back in 1961. “Rapp was supposed to get the ball in the last few seconds and try to drive for the basket and draw a foul if he had the position. If he could not get inside, he could use his 6-6 height for a good, short jump shot.”

With Garrett dribbling in the back court for some time, he decided to pass to Coleman in the middle, but Meadows and Simpson converged on Coleman.

“He started to pass, I tipped the ball-we both did about the same time. He (Coleman) came down with it and I tipped it again,” Simpson told the St. Louis Post-Dispatch in a post game interview.

Simpson secured the ball and raced to the other end making the breakaway layup and getting fouled by Coleman in the process.

“They were seating people literally on the ends of the court,” began Riddle. “If I remember right I think it was chairs there and they stuck him in the chairs. We made the layup and then made the free throw.”

With the Orphans out of timeouts the Kahoks let them take it the length of the floor and gave Coleman the layup to make it 66-64, but Collinsville didn’t have to inbound the ball and was headed for state with a 29-0 mark. The Orphans finished at 29-2.

Davies had employed a dramatic strategy that had southern Illinois buzzing, however Kahok coach Fletcher was not one of those.

“I won’t discuss another man’s strategy. Basketball is a game for the kids to enjoy playing and have fun. Naturally I’m happy we won and I’m sorry the Centralia kids lost. They have a fine ball club. But somebody has to win-that’s the way it goes,” coach Fletcher told the Southern Illinoisan afterward.

While the ending of the game sent Kahok backers into a frenzy and Orphan supporters fell silent, the Alton Evening Telegraph reported the next day that, “the game was acclaimed the top contest of the eight first round games around the state.”

The team stats bear that synopsis out.

There were an astounding 25 lead changes in the game along with 18 ties.

Collinsville was 25-53 from the floor while the Orphans went 25-50 from the field. The Kahoks were 16-19 from the free throw line, while Centralia went 14-16. Even the foul situation saw a differential of one, with Collinsville whistled for 14 fouls.

The Kahoks went on to beat highly touted Rockford (East) 71-48 in the state quarterfinals, Peoria (Manual) 76-39 in the semis, and hammered Harvey (Thornton) 87-50 in the state title game.

Collinsville would be named the National Prep Poll National Champions in 1961.

“I just want you to know that I am so blessed to have grown up at that time, at that place and with those guys and those coaches that we had, it was fantastic,” said an emotional Redmon.