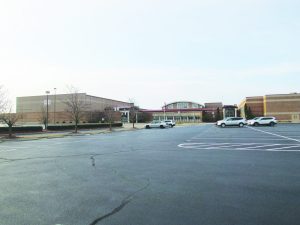 Due to the statewide school closures, the Triad school district has recently gone to online schooling to keep education going. Most teachers have used an online service called Google Classroom to stay in touch with their classes. Google Classroom has been used by many students and teachers for several years, which means most students have ample experience with the service.

Matt Tipton,a senior at Triad, has said about the ease of online schooling, “The majority of my teachers have made it easy to find and turn in work. My teachers are available from 9-2 if I have questions or concerns.”

Another senior, Lucas Dees spoke of the online classes and stated, “I’ve had a pretty easy time finding what I need to do. Of course there’s been times where something isn’t completely accurate to how it was described but we have all been expecting that. It’s not just the students who are going through this for the first time.”

Along with Google Classroom, some teachers have streamed classes for their students to watch and ask questions. A common service for those live video classes has been a service called Zoom.

A junior at Triad, Clay Barker, has said of the learning, “It’s been pretty simple overall. Most teachers have prepared us for online classes for most of the year by using google classroom and other online resources.”

Although going away from in person classes in school history has been a stressful transition for some, there have been benefits. This has included quicker school days for some and less work outside of school for others. Many students have also felt there has been a small reduction in their workloads from school.

In the words of senior Spencer James, “During this E-Learning period, I believe I have had a lighter workload. I’m still working from 8:30-3:30 everyday, but my evenings are free.”

Blake Cunningham, a junior, feels, “It feels like there is more work than normal, but I am able to get through it faster.”

One distinct advantage that has come from online classes is that students do not need to spend time walking from class to class. On a typical school day, students at Triad High School have seven passing periods, each which last five minutes. This means a 35 minute reduction in time each day from not having to travel from room to room.

Kellan Collins, another senior at Triad, feels some positives to the change to online schooling are that, “I’d say when it comes to work I have to do considerably less than I normally do and I can do it at my own pace.”

Overall, students feel in a variety of different ways about e-learning overall. Some have worried about their changes to their AP courses, which prepare students for an accumulative test at the end of the year. That test is administered by the College Board, a national organization, and if students perform well enough, they can earn credits that transfer to colleges and universities across the nation. Similarly, some students are also concerned about their dual credit courses, which depending on students’ grades, can also earn them college credits.

Student Ian James has said of online classes, “I don’t really like e-learning that much because it is harder to keep track of assignments than normal school in my opinion. I also don’t like it that much because as a senior, I do not like this change for the last three months of high school. I just want to be done and do not want to deal with figuring out a new way to learn. I am also concerned with how this is affecting my dual credit and AP courses.”

He also added on, “I understand that this is what we have to do and is the right thing to do, and I am not questioning the choices the administration and state have made, but that doesn’t mean I have to like it.”

Another student at Triad High School revealed, “I am somewhat stressed about e-learning because you pretty much have to learn most subjects by yourself, but I also think e-learning is a good prepper for college because it makes you learn subjects yourself and you can go to work during the day more often and get more hours in.”

Bradan Bruce, who is in his senior year at Triad, has stated, “I feel it’s good for a temporary issue like this, but it seems less productive and it could never replace regular class. I thought it would be difficult to be motivated to get things done, but I’ve found that’s not the case.”

There have been some students who have found e-learning to be a good adjustment. Some have cited the ease of the transition from in person classes or the experience of a different type of school, as positives.

Clay Barker has said now that e-learning has started, “I have more relief because my schedule is completely determined on how I want to plan it; almost like a mini college simulation. Though there is that looming thought of the “steamroller” catching up to me if I don’t do my work.”

An additional perspective comes from Spencer James, who has stated, “My E-Learning experience has been very positive. Of course, I would still prefer to be at school, see my friends, and compete with the track team, but this has gone a lot better than I thought it would.”

Last week, state officials decided to extend the closure of all schools through April 7. For now, this remains the tentative date for the Triad school district to return to normal classes.