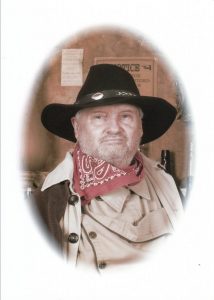 Gilbert was born on December 9, 1949 in Creal Springs to James and Eva (Parker) Slater.

Gilbert is survived by children, Janet and David Slater of Champaign-Urbana; sister, Verna Briscoe of Johnston City; brother, Albert Slater of Pittsburg; his companion of five years, Sharon Ball of Marion and his cat, Boots.

Gilbert served his country in the U.S. Army during the Vietnam War.  He then worked as a Surgical Technician at Memorial Hospital of Carbondale for thirty years until his retirement in 2014.  Gilbert loved history and participated in Civil War reenactments.  He enjoyed traveling the world including, France, Germany, Italy, Egypt, Israel and many others.

Private family services with Military Honors will be held at Creal Springs Cemetery.

Meredith Funeral Home in Carbondale is in charge of arrangements.  To leave a story or memory of Gilbert visit www.meredithfh.com.