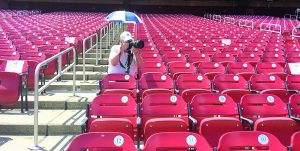 Keith Gillett, former editor of the Mascoutah Herald, currently working for Icon Sportswire as a photographer, was one of a handful of photographers granted access to cover the opening series. Because of strict covid 19 protocols, Major League Baseball is allowing just 35 media to cover games during the shortened season. The number includes writers, broadcasters and a small number of photographers. Submitted photo

Sporting events without fans. That’s the new normal now as the country is six months into the coronovirus pandemic with no end in sight. But baseball finally got underway for the St. Louis Cardinals this past weekend and former Mascoutah Herald editor Keith Gillett was among a lucky few that got to watch the first games.

Gillett was one of eight photographers that was credentialed to cover the opening series. He is a contract photographer for Icon Sportswire of Burbank, California, an international sports photography wire service. He took the position with Icon after retiring from the Herald in 2012.
“It was really weird to watch major league baseball in an empty stadium,” he said. “Everything was as you would expect for a regular game, just no fans. They piped in crowd noise to help give you the feeling that you were surrounded by thousands of fans, which only added to the weirdness.”
“They had the photographers assigned to two rows in back of the dugouts on the first and third base sides. Each row had three seats designated as a photo position, socially distanced about six seats apart. On arrival we were given a temperature check and asked questions about our current health and recent contacts and travel.
“On opening night a lot of people showed up to watch the game at Ballpark Village, and some attempted to watch by looking through the stadium gates.
“On Saturday and Sunday it was a struggle as we dealt with the intense sun. As Cardinals’ fans probably know, the seats behind the dugouts are in full sun, so several photographers brought golf umbrellas to attach to their seats and everyone brought a cooler with water and GaterAid.”
As part of the restart for Major League Baseball, each team’s organization was divided into three tiers, with the numbers in each tier limited. For Tier One, the teams were limited to 50 players, coaches and staff. Tier Two was for support staff, and Tier Three was limited to just 35 members of the media which included broadcast crews, camera operators, writers and still photographers.
“Because of the Tier 3 limitations for media, I really felt lucky to be credentialed. We were not authorized any close contact with the players and reporters needing player interviews had to conduct them over Zoom.
“Overall it did not greatly affect my photography as I always use a long telephoto lens for action shots. This time we have to shoot through the screens that have been installed for safety. But we were not able to get the great reaction shots you get of the players celebrating in the dugouts after hitting a home run or making a big play.”
For Gillett, who averages about 100 assignments a year for Icon, it was his first sports assignment since covering the Panthers-Blues NHL hockey game on March 9th.
“I don’t think any of us thought when we left Enterprise Center that night how sudden and long the shutdown was going to be, and how difficult playing any major league sport was going to be. I’m still not certain that we are going to make it through the baseball season, or have pro or college football this fall,” Gillett said.
“In a flash I lost coverage of the rest of the hockey season, the Stanley Cup Playoffs, the NCAA Tournament, the Olympic gymnastics trials, and four months of baseball.”
Since joining Icon in 2012, Gillett has covered a variety of events for Icon, including Cardinals and Royals baseball, Saint Louis and University of Iowa basketball, Iowa and Illinois football, PGA golf, major league soccer exhibitions, XFL football, and St. Louis Blues hockey. After posting his images to Icon, the wire service also transmits them to the Associated Press and Getty.
“I think my favorite experience was covering last year’s Blues parade in downtown St. Louis – the March to the Arch. The thousands of fans and the fact that the players did not stay with their vehicles and decided to wade into the crowd to share the Stanley Cup with them. I was so close to the players that I had a difficult time keeping from getting hit by the Cup as the players moved around with it.”
Posted in Breaking News, Sports