• 1881: The newspaper and plant were sold to George M. Armstrong, then later sold to Henry

• 1885: James Jarvis established the Troy Record, bought The Bulletin, and merged the two.

• 1886: The Record was sold to L.K. Pauley, who ran it for three months before it was taken

back in foreclosure of mortgage.

• 1886: The Record was suspended and Jarvis continued in the printing business until October.

• 1886: The plant was sold to Henry A. Miller and Fred W. Miller, who established The Troy

Monitor. It was later sold to Samuel W. Rawson and George C. Hartung.

• 1894: Hartung sold the paper to Joseph R. Edwards and August Droll, who completed the

first volume of The Troy Star before establishing The Weekly Call. Edwards later sold his

interest in the paper to Droll.

• 1899: B.W. Jarvis became the sole owner of The Weekly Call. It was the first weekly

newspaper in the county to install a typesetting and linecasting machine.

• 1946: Jarvis, due to poor health, closed The Call. Troy was left without a paper for another

changed the name to The Troy Tribune.

• 1978: Paul Ping sold the paper to Howard Wood, a sports reporter at the paper.

• 1987: The Troy Tribune merged with the The Troy Times, with Paul Ping as Publisher/ 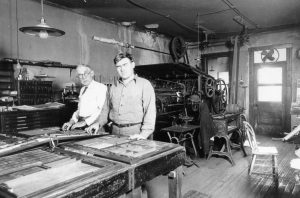