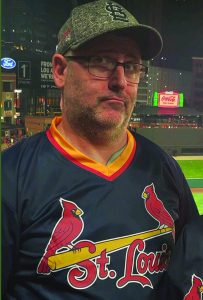 Maedge’s son Austin said he saw his father at work when he came to get a key to storage unit.  According to Austin Maedge, There may have been some ‘family drama’ but does not know if this the reason for Richard’s disappearance.  Austin also mentioned it was not like his father to leave and not come back.  “We just want to know he is safe” said Austin.

Austin also reported that his father likes the St. Louis Blues & St. Louis Cardinals and it was unusual for him to seek places such as a bar to watch the games.

Troy Police Sgt. Daniel Lipe reported “We are working with the family and looking for the public’s help”.  Anyone with any information is urged to call the Troy Police Department at 618-667-6731.