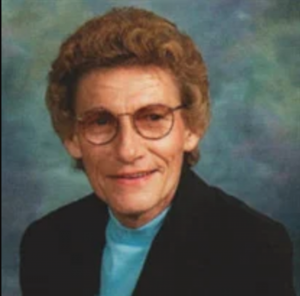 She was born on Friday, October 26, 1934, in Highland, IL, the daughter of  Wilbert and Ida (nee Gilomen) Reinacher.

She was a member of Grantfork United Church of Christ.  She was also a former member for many years of the Thursday Night Ladies League at Grantfork Bowling Alley.

Ms. Reinacher was born in Marine Township, northwest of Highland, in Deck’s Prairie; where she grew up  on the family farm.  She attended Case School.  She started working at Wick’s Organ Company in 1951.  She retired on July 30, 2004.  May always lived at home where she took care of her parents for many years. She enjoyed traveling to Colorado, Washington D.C., New York World’s Fair, and many others.  She traveled until her mother became ill.   Following her parents  deaths, she continued to live on the family farm home place.  She enjoyed reading; watching Cardinal baseball games; working in her yard; and bowling for many years.  She enjoyed living in the country and always had her dog, “Casey”, with her on the farm.

Interment will be at Highland City Cemetery in Highland, IL.

Memorial contributions may be made to V.F.W. Post #5694 or the charity of donor’s choice.