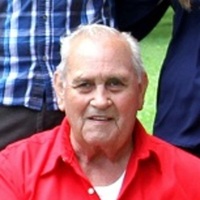 Penrod. James passed away peacefully in his home surrounded by loved ones on

Ballance Penrod. He married the love of his life, Peggy, nee Casper on September 22,

Together they raised four children. James served in the army from 1960-1962,

spending much of that time in Korea. James and Peggy owned and operated Penrod

Trucking for over 40 years. James was an alderman for the City of Troy for several

years in the mid 90’s. He is also a lifetime member of the American Legion and a

member of the Moose Lodge. James is known among friends and family for serving up

the best bar-b-q and coldest beer in the three counties. He never knew a stranger,

were down on their luck.

James is proceeded in death by his wife of over 60 years, Peggy nee Casper; a

great-grandchildren, Monroe and Andie Pendergrass, and Liliana and Elizabeth Penrod.

Memorials can be made to BJC Hospice or St Jude’s Children’s hospital. Online expressions of sympathy may be made at www.Richesonfh.com.