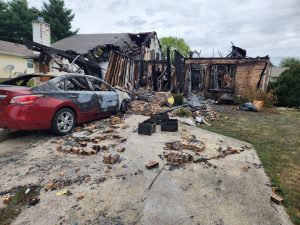 Police in Madison County along with other agencies are investigating a suspected domestic situation that ended with one woman dead and a home destroyed by fire.

The Troy Police Department was dispatched to a domestic disturbance on Thursday, September 22, at around 2:23 p.m. in the 500 block of Woodthrush, in Troy, Illinois. The preliminary investigation led police officers to an address, in the same block that was on fire.

Susanne E. Tomlinson, 69, of Troy, was discovered dead in her residence. Tomlinson was pronounced dead on the scene by Madison County Coroner’s Office Investigator Shelbi Frakes at 4:45 p.m., according to a press release from the coroner’s office.

Prosecutors have charged Michael E. Sloan Jr., 40, with three counts of first-degree murder for allegedlly starting the fire that caused the death of Tolinson.

Sloan was pulled from the fire and taken to a St. Louis area hospital where he was treated for burns all over his body. Sloan is still hospitalized, as of today, according to a press release from the Troy Police Department.

The small duplex was completely destroyed along with her burgundy Nissan Altima, and even singed the siding of the adjacent duplex.

“It was warm on the inside (of our duplex), but it didn’t do anything to the house except melt the siding. We’re still trying to wrap our heads around this,” said Jason Burk, a 22-year-old student at SIUE, who lives next door.

The following day, Tomlinson removed two bumper stickers from the back of her mother’s burned out car, including a peace sign and a dog’s paw with the words, “Who rescued who?” Tomlinson’s dog, Sydney, died in the fire, according to family and friends.

“Our dogs were the best of friends,” said Emily Trier, a 22-year-old SIUE student who lives next door with Burk. “We knew (Sue) really well. We’d sit at her table outside and have coffee and talk. She loved to garden. Her flowers were a huge part of her life. She had a memorial for her dad in her garden. It’s all gone now.”

Courtney Tomlinson, 39, of Troy, and the daughter of the deceased described the events that led to the fire as terrifying, and that authorities confirmed as being investigated as a crime.

“My boyfriend killed my mom… ,” said Tomlinson Friday morning while standing outside her own duplex, reported the Belleville News-Democrat.

Tomlinson lived with her boyfriend and two children, ages 12 and 9. She said she met the man about two-years ago at Lotawata Creek in Fairview Heights.

“I was kicking him out,” said Tomlinson. “He owed me money, and I was getting ready to pack his things (on Thursday). … He zip-tied my hands and put a knife to my throat. I broke out of it. I was fighting him. I don’t know how I’m still alive today.”

Kevin Manso, Troy’s interim fire chief, said first responders pulled a man from the fire and transported him to a St. Louis area hospital. It took three hours for firefighters to extinguish the flames.

Tomlinson’s two children were at school during the time of the domestic disturbance. She said that when their school bus arrived to drop them off, the bus driver kept them on board after seeing first responders dealing with the fire.

An autopsy revealed that Susanne E.Tomlinson died of smoke inhalation.