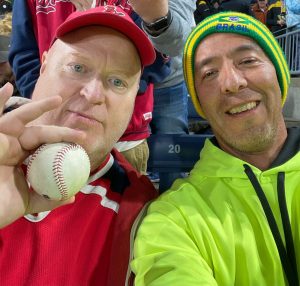 Mike Hutcheson of Trenton, pictured with friend Gorge Garcia, holds the Pujols No. 703 home run ball he caught Monday as the Cardinals faced the Pirates.

It’s been an eventful week for Mike Hutcheson of Trenton, Illinois, a life-long St. Louis Cardinals fan who is now the proud owner of Albert Pujols No. 703 career home run ball.

From sheer joy to some frustration in the hours and days that followed, Hutcheson on Thursday shared the story of what led him to Pittsburgh to catch the two-run shot into left field that would mark Pujols’ 24th of the season, pulling him ahead of Babe Ruth in career RBIs.

“I have all the appreciation in the world for Albert Pujols,” Hutcheson said. “And all of this hoopla is really an homage to his career and what an influence he’s had on people in St. Louis and all of the baseball world. I do feel fortunate.”

In late August, Hutcheson was at a game in Cincinnati and just two rows behind a Cardinals fan who caught Reds rookie catcher Chuckie Robinson’s first home run. He said that’s when he started mulling over how awesome it would be to do the same.

“Well the Reds organization literally descends on this girl and says ‘hey, we want the ball,’” Hutcheson said. “Me and my whole family are right behind her and watching all this transpire. Well, that began the conversation, ‘wouldn’t that be cool.’ And eventually it turned to, ‘wouldn’t it be cool to be there for Albert’s 696 or 700.’”

An avowed “cheap-seat shopper,” a few weeks later he took his family to a Washington Nationals game. This time he had a strategy. Moving forward he would focus on seats in left field.

“If you’re going to catch a home run, that’s likely where it’s going to be,” Hutcheson said. “So instead of taking any seat in any location, I started definitively shopping in left field. I looked and 75 to 80 % of Albert’s home runs were hit in that section. And the same with Yaddie, so I was going to play the odds.”

With the season winding down, Hutcheson looked for any games left he could take his family to. He decided on the Pittsburg series, it being the final of the year. The caveat was the game took place during the week and he was unable to bring his children, now in school.

“I couldn’t take the kids, but I thought there was no reason I can’t go,” Hutcheson said. “I travel a lot for work (at Ameren Missouri) and I had a lot of airline points and hotel points saved up. I checked Stubhub and tickets at the time were about $10 a seat, right where I sat, in the third row, right on the foul pole.”

Whether it was premonition or wishful thinking, which Hutcheson said the latter is most likely the case, in the days leading up to the game he told his friend Greg Bowers, the manager of Eagle Coin, Stamp & Jewelry in O’Fallon, that he was going to catch a home run ball. Hutcheson said he is planning on bringing the ball to Eagle Coin in the near future.

“I’ve been telling everybody for six or eight weeks,” Hutcheson said. “I’ve had several conversations about how I was going to Pittsburgh in October and I was going to catch that ball. In reality, it was wishful thinking. It’s part of the fun.”

Hutcheson described the moment Monday when he caught the ball, saying he can still see it in his mind. The row in front of him was largely empty and as the ball soared over the outfield, he was “dead focused” on it.

“I bare-handed it,” Hutcheson said. “My hand still hurts, but I’ll take that any day of the week. I hung on to it. It was a smoker and I basically one-handed it. I have a degree in nuclear engineering, so I understand the physics of it. When it comes to me I know I have to cushion that ball to keep it from completely bouncing out of my hand.”

“You reach up. You reach out and try to cup it as much as you can. Then you let it push your arm back and use your other hand to get it in your possession.”

Afterward, he was swarmed. A man nearby threw him in a bear hug. People were slapping him on the back and Hutcheson was concerned amid the melee he might lose the ball. He says moments later an usher spoke with him, telling him Pujols wanted the ball and would exchange it for an autographed one.

He and the usher walked out to a more quiet area to discuss the proposition, but at that time another usher said they could not confirm that Pujols was behind the offer.

“Honestly, it’s not clear if he (Pujols) was really even talking to me,” Hutcheson said.

The frenzy continued with people asking to hold the ball and slapping him high-fives. Amid this, Hutcheson said he sought to get the ball authenticated. He said he was not comfortable walking around the stadium with the ball, so those around him were trying to look up information on the process.

“Nobody could come up with an answer,” Hutcheson said. “There are guys there who do that, but nobody tells you where they are. I thought the ushers or somebody should come and tell me what to do. I asked them three times and I’m kind of freaked out for the next three innings. So afterwards, with everybody taking pictures I’m just ready to get out.”

After leaving with the ball, Hutcheson said he came back the next day to see if it could be authenticated. When he finally spoke with the MLB official in charge of the process, he was informed, much to his frustration, the organization can not authenticate any ball that has left the stadium.

What that means for the value of the home run ball, is unclear. It could reduce the price, but at this time, Hutcheson said he’s not sure he would sell.

“I’m not really sure if it meant anything or not or if it changes value or not,” Hutcheson said. “Because there are certainly other ways I can show that this is the ball. A guy walked up and offered me $100,000 for it and I laughed it off. I’m thinking it was not a real offer. And even if it was, I’m not taking the first one.”

For the time being, he plans to just hold on to the ball and share it with family and friends.

“All I have is a ball that is really cool.”