Benedict H. Mueller, 84, of Troy, IL, passed away on Monday, October 3, 2022 at Eden Village surrounded by loved ones. Born Tuesday, February 15, 1938, in Mascoutah, IL, Dick was the son of Herman and Rosa (Ottensmeier) Mueller. He married Mary Ann (Vollet) Mueller on May 10, 1961 in Trenton, IL. Together they lived a life filled with love and happiness built on a foundation of faith. Dick was a loving father, grandfather, and great grandfather.

Dick retired after 37 years from the terminal Railroad Association of St. Louis and with his wife, Mary Ann, owned and operated While U Watch Shoe Repair in Wood River, IL; he was also a veteran of the United States Army.

He was preceded in death by his parents; his wife of 50 years; son, Kevin B. Mueller; brothers, Alfred, Francis, Martin, Benj 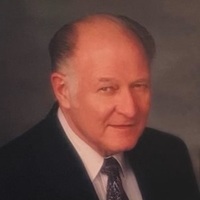 Memorials may be made to St. Jerome Catholic Church, Troy, IL  Online expressions of sympathy may be made at www.Richesonfh.com