Over the four day stretch from October 3-6, Triad soccer played three games and traveled over 250 miles.

Opening the tough segment of action was an October 3 trip to Rochester. The Springfield area school entered with a 7-9-1 record.

Wyatt Suter would open the scoring in the Monday night affair, pushing the Knights to an early 1-0 advantage. His brother, TJ Suter, added on another first half goal and scored in the second to deliver a 3-0 win.

The following evening, the Knights played host to the Mascoutah Indians. A win would guarantee at least a share of the Mississippi Valley Conference title would belong to the hosts. 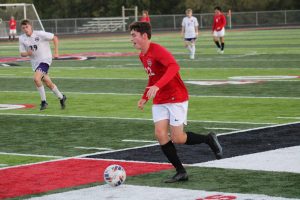 Triad won the previous meeting in 4-1 fashion, but Coach Jackson knew the Indians would bring a formidable challenge, “We knew this would be a tough battle. Nick is a great coach and they’ve improved dramatically. They had a game plan and they had us flustered in the first half.”

After the first half was scoreless, Triad knew they needed a spark. It would come just 56 seconds into the second half as TJ Suter scored off a Charlie Gentemann cross.

Wyatt Suter tacked on another score for Triad, this time with 19 minutes left, after lasering a well hit cross from Gibson Hunt. Hunt would also assist Stewart on a later goal to swell the lead to 3-0.

Rader added another shutout to his resume as he converted his team’s lead to a final score.

“We cleaned it up in the second half and scored some pretty goals. But I thought we were just flat in the first half and you could tell we traveled yesterday and had a tough game in Rochester last night,” Triad’s Coach spoke of his unit’s 3-0 victory.

Coach Jackson also delivered his thoughts on clinching a share of the MVC crown, “That’s one of our major first goals. It’s a big deal. It’s fun to play these teams and we’ve played them for years and all the coaches know each other and we’ve been battling.”

Looking to clinch sole possession of the conference championship, the Knights hit the road on October 6 to play Waterloo.

At the half, both teams were knotted at 1-1. Hunt delivered the lone Triad score via a Gentemann helper.

The conference foes seemed set to play overtime as their tie remained in the final minutes of the half. But misfortune came for the visitors as a collision of Knights left an empty net for Waterloo to score the final tally for their 2-1 outing.

Later the same night, Highland took Mascoutah to penalty kicks in a 0-0 tie. The Bulldogs would win in sudden death, which would seal sole possession of the conference crown for Triad.

The Knight’s conference crown is their fourth consecutive title and third consecutive undisputed title. Their loss to Waterloo is only their second conference loss over that stretch.