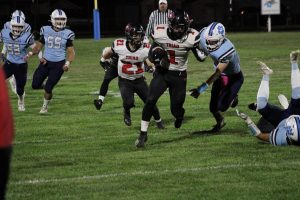 The morning of October 5 brought changing news to the Triad Knights: Mt. Vernon had been forced to forfeit an earlier season victory over them. With the changed result, the football Knights improved from 3-3 to 4-2.

The possibility of the forfeit, stemming from an ineligible transfer, was first made known to Triad on September 30. After the IHSA reviewed game tape, they determined that the player had a significant impact and forced the Rams to forfeit their win over Triad and another from against Althoff.

Their decision officially became public on the morning of October 5. In a press release to the media, Mt. Vernon stated that their football staff and coaches were not made aware of the issue until after the forfeited games were played.

With a suddenly improved record, Triad hit the road to take on the Jersey Panthers on October 7. Their meeting with the 2-4 Panthers will also be the final Mississippi Valley Conference game played on grass for the foreseeable future, as Jersey will play on turf next season.

After the Knight defense forced a quick stop on the opening drive, the offense would be set up with a short field at the Panther’s 48 yard line. Quarterback Nic Funk cashed in on the opportunity after connecting with Ryan Hazelwood for a 20 yard touchdown pass and a Jake Stewart point after made their lead 7-0.

After both teams traded subsequent fumbles, the Panthers were driving near midfield. But a 60 yard pick six from Tristan Darby swung the momentum full in Triad’s direction. His score marked the second consecutive year the senior scored a non-offensive touchdown to kickstart his team early.

“It’s exciting. I never thought that would be the outcome but I’m grateful for it.  I think good plays early are important to set momentum for the game and it’s worked both weeks,” Darby discussed his success at scoring early.

Triad would knock on two more touchdowns without using their offense, as Jarret Del Rosario recovered a fumbled kickoff in the endzone and Carter Vandever added another long pick six. Paired with more point after tries from Stewart, the visitors moved ahead 28-0.

The next three drives of the game ended in turnovers, including a fumble picked up by Vandever and another interception from Koen Rodebush. This would translate into the final points of the half after Stewart drilled a field goal from 42 yards out.

Turnovers continued in the second half as the Knights lost possession on the opening kickoff of the second half. Jersey turned this into their first points of the game with a Chase Withrow touchdown to slice the lead to 31-6.

Only one other score came in the third quarter and it came off the foot of Stewart. This time converting from 34 yards out, his field goal changed the score to 34-6.

Both teams added touchdowns in the fourth quarter, with Funk running in a keeper from 7 yards out for Triad’s final tally. With a 41-14 final, the Knights improved to 5-2 on the year.

With their fifth win, the Knights officially become playoff eligible.  It also marked career win 150 for Triad’s Coach Paul Bassler, more than any coach in history at any of the six current Mississippi Valley Conference schools.

“Our expectations coming into the season were much higher than 5-2 and we’re getting the ship righted a little bit. Last week was a huge step against a really quality team, this week was a good step for making things happen and next week’s going to be massive. That’s a playoff game for us. If we can go 7-2, I feel like we have enough playoff points to get us a home playoff game,” Bassler spoke of his team’s Jersey victory.

Plenty will be on the line next week as Triad hosts Waterloo for their final conference game of the year. The winner will take second place in the MVC and mathematically could tie Highland for the crown if Mascoutah upsets the Bulldogs.

Entering their matchup, Triad and Waterloo both stand at 5-2. Either team will likely need to win out for a high probability for a home playoff game.

Senior running back Evan Davis will look to carry the visiting Bulldogs. The back has picked up 1110 yards from scrimmage and 11 touchdowns so far this year.