The U.S. Air Force’s C-21 “the Cougar” is more than a military-styled Learjet for transporting high-ranking government and military officials and distinguished dignitaries, it also supports the aeromedical evacuation mission in transporting ambulatory patients around the U.S.

“Aeromedical evacuation operations are exactly what they sound like,” Captain Sam Echols, Public Affairs, 375th Air Mobility Wing said. “These are flight nurses and flight technicians that will go into a deployed environment or even stateside anytime a service member has been injured and they would evacuate them out.”

Echols said crew members are able to essentially set up a miniature hospital on the aircraft and are trained to keep patients alive.

“So it’s a fascinating job, they have to be ready to go at a moment’s notice,” Echols said. “They have the training in the air to keep these patients alive. They have to have the mental composure and fortitude to deal with that trauma and make sure they’re accomplishing the mission.” 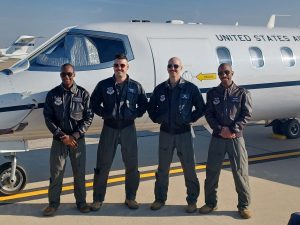 SAFB pilots right to left Johnny Frye, Sidney Gamison, Alex-Ververis and Nick Felton appear alongside the Air Force’s C-21 “the Cougar, ” a versatile jet which has found a place in medical transports. Photo by By Devese “Dee” Ursery, Reporter

Scott Air Force Base is home to the only North American fleet of the C-21s,and consists of 14 aircrafts. On Oct. 7, the base invited media onboard the C-21, for their “Arch Tour” that flew at eye level to the Gateway Arch. During the tour, reporters flew at about 2,000 feet at 230 knots (200 MPH). The tour was an opportunity to learn about the history and mission of the C-21.

“It’s a huge switch,” he said. “You go from doing desk work to being in the air on a consistent basis, it’s very fun.”

The aircraft is the military version of the Learjet 35A, a business jet. While the primary mission of the C-21 is to fly high-ranking military officials, such as three and four-star generals to their destination, the aircraft is capable of transporting five ambulatory patients for aeromedical evacuation operations. The C-21 has a crew of two and may be flown from either cockpit seat. It is equipped with an automatic navigation system to  enhance crew efficiency.

One very important mission that is carried out by the C-21 is the transporting of wounded warriors and medical patients needing to get to a surgery location in a matter of hours. For example, a kidney transplant patient receiving a donated kidney would need to be transported from his location to a V.A. hospital in either Iowa or Nashville, within two to three hours, from the hospital bed of his original location straight to surgery.

Capt. Hannah Swysgood, 375th Medical Group said the central location of the C-21 allows for a quick phone call to get patients where they need to go.

“The process starts with a phone call from the doctors, saying the patient needs this and why,” Swysgood said. “And then it moves up the chain to how we are gonna mobilize that patient, they assign a plane, and then a team, then we go and pick that patient up.”

“The process can take literally a couple of hours, and depending on how acute the patient is it could take up to a couple of days, depending on what the initial doctor said and what their order set was because it starts right there, at the bedside,” she said.