For Don Allen, CEO of the American Veterans Traveling Tribute, it’s not about recruitment. 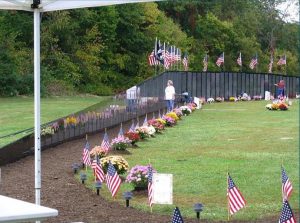 Visitors view the Traveling Vietnam Wall at a recent showing. The wall is an 80% in size rendition of the monument in Washington, DC and is set to appear Oct. 20-23 at Truck Centers Inc. in Troy. Photos courtesy of AVTT

He believes the most important reason for viewing the Traveling Vietnam Wall and other displays soon scheduled to stop in Troy is helping future generations understand the price of the freedom that Americans enjoy today.

“It is important not because we have to recruit the next generation of our military,” Allen said. “It’s important because freedom is not free. Everybody has to water that tree at some point. We have to teach by example the people after us what it means to maintain your freedom and not give it up to bureaucrats, foreign or domestic.”

A host of activities is planned leading up to and throughout the weekend of Oct. 20-23 as the Traveling Vietnam Wall and other tributes come to Truck Centers Inc. Training Center at 2376 Formosa Rd. in Troy. The traveling wall holds the names of the 58,318 Americans killed in combat during that war and is an 80% in size replica of the Vietnam Veterans Memorial in Washington, DC.

“What we are about is honoring all the people who have sacrificed,” Allen said. “The names are important to us. If your name is on display to see, you can not be forgotten.”

Allen, a Vietnam veteran, said over the years he’s also noticed a change in the demographics of those viewing the displays. As his generation ages, a younger crowd has emerged, one interested in the sacrifices made by parents, grandparents or even friends lost in more recent conflicts.

“It’s changed over time,” Allen said. “There are not many Vietnam Veterans left. So the questions become different. Wars are for young men. My war was over years ago. So that’s the kind of demographic you are going to see. They may have had a dad in Vietnam or an uncle or something. Chances are they had a buddy killed in Afghanistan or Iraq a few years ago.”

“There are lots of different reasons to be there. And the reason is not necessarily because you are a veteran of that conflict,” he said.

The event is sponsored by Truck Centers Inc. Jim Beaver, of the company, is organizing the event and said it is part of the center’s efforts to honor those who served, as well as bring a piece of history and a fun event to the community.

“Truck Centers have always been extremely supportive of the military, veterans, law enforcement, fire departments and all first responders,” Beaver said. “John Hopkins, the founder of the company and father of Katie Hopkins (president), is an Army veteran of the Vietnam era. Over 58,000 lost their lives in Vietnam and when the veterans came home they were virtually ignored. We hope everybody comes out and remembers the sacrifices they made.”

In addition to the tribute, Formosa Drive is set to be lined with 1,200 American flags leading up to the facility. Those efforts are led by The Flagman’s Mission, a local nonprofit with the mission of providing “patriotic and educational information and pageantry for civic, military and community funerals, parades or patriotic events,” according to the organization’s website.

Jeff Hastings of The Flagman’s Mission said the display, which will feature three-by-five foot flags on 10-foot poles, is sure to be an attention getter as anywhere between 500 and 1,000 are set to be placed leading up to the event.

“We want to create not only a patriotic memorial around the wall, but also to create awareness,” Hastings said. “Our flags fly in honor of fallen heroes. Every time they fly, not only are they flying in honor of the hero we are honoring, but all those soldiers before. That’s why we do this. It’s a memorial.”

Volunteers are requested to help place the flags. Hastings encourages students and patriotic organizations to take part. Those interested can show up at 2 p.m. Oct. 18 at Truck Center. Help is also needed to take the flags down, which will take place at 2 p.m. Oct 23. For more information contact theflagmanmission@gmail.com.

Originally formed in 1998, the tribute was purchased by Allen in 2005. At that time he ran the project as a one-man show. Over the years the tribute grew and in 2019, the doors of a permanent facility were opened in Bullard, Texas, according to the AVTT website.

By then, the AVTT had grown to feature names of those who fought in wars in Afghanistan and Iraq and many other conflicts, as well as the victims of the Sept. 11 terrorist attacks on the World Trade Center.

“What we have now, and what will be coming into Troy, includes the 80% wall and six more panels for all of the other conflicts,” Allen said. “Our intention is to honor everybody who served. So everything from Vietnam until now, we have the names of the casualties.”