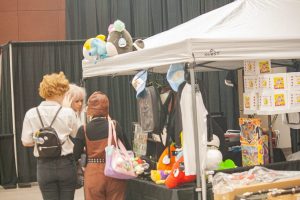 A group of cosplayers visit one of the many vendors at this year’s Anime Senpai convention.

This year’s Anime Senpai convention yet again brings many in the community together for cosplay contests and a weekend of fun.

After not being able to hold the event due to COVID-19, Anime Senpai returned to Collinsville’s Gateway Convention Center with a limited number of vendors in 2021. This year marks the event’s fourth year in operation.

The three-day convention consisted of various different events along with different vendors, group activities, and autograph signing from voice actors.

One of the vendors, Asheford Frost, is the owner of a small business, Seifer Stitches. Frost said she enjoys being able to come to conventions like Anime Senpai to sell her wares due to her own love for anime and seeing how people react to some of her products.

“I do a lot of Pokemon stuff, and the best part is having someone run up and they’ll see something of their favorite Pokemon [that’s] not a very popular Pokemon, so you never see anything of it. They’re just like ‘Oh my god that’s my favorite thing. I love it. I need to have it.’ That always gives me a good feeling,” Frost said.

The event itself is one of many put on by NCA Entertainment and is one of the larger anime conventions in the area.

Rebbecca Starrett, the program director of Anime Senpai said she enjoys being back to full capacity and seeing people she saw in previous years.

“We have a lot of return attendees which we love seeing — people who have been coming since year one, which is seven years ago now, people who came pregnant in year two with their six year olds showing up to panels,” Starrett said.

Starrett said the convention takes a lot of planning and starts as soon as each one ends due to how much it takes to put it on and the other conventions that she helps to run.

Anime conventions themselves are an outlet for many who might not be able to express their enjoyment for anime and the subculture that surrounds it, as well as a social environment where people can share their interests.

Before becoming the program director, Starrett said she first became involved in Anime Senpai due to one of her previous relationships until she decided that it was for her.

“The thing about anime conventions is it’s people who are more on the fringes of general society [and] they get to come here and just dance around with their friends and have an amazing time and make friends … There are kids who this is their social event of the year and that’s why we do it,” Starrett said.

Santirojprapai said he enjoys getting to see all of the different cosplayers and getting to work with all of the staff at the event.

One of the convention’s big draws is the anime voice actors that show up for autographs, giving people a chance to meet the voices behind some of their favorite characters.

Kent Williams, a voice actor for characters such as Supreme Kai in Dragon Ball Z and Father in Fullmetal Alchemist: Brotherhood, said this is the first time he’d decided to be a guest at the Anime Senpai convention, but that he’d been to Collinsville before.

Kent said this is also one of the many events he’s attending this year after not attending as many throughout the pandemic.