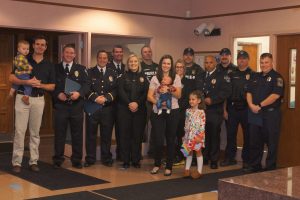 Glen Carbon trustees during the Tuesday regular meeting recognized several first responders with Life Saving Awards for their assistance in August in helping a mother give birth.

On Aug. 31, emergency dispatcher Kelsey Overholtz received a call of a mother in labor. As she provided 9-1-1 instructions for childbirth, Officer Zachary Walters and Sgt. Jeffrey Blind arrived ahead of paramedics to the home of Anthony and Alicia Rocca and discovered the birth was imminent, according to a Glen Carbon Police news release.

Baby Rhett Rocca was soon delivered into the arms of Sgt. Blind and was reported to be a healthy boy.

“This job is just so unpredictable, and most times we are called to unhappy and tragic incidents,” Police Chief Todd Link said in a news release following the birth. “I’m so glad our police department got to be part of this truly happy event, and I’m so proud of our dispatcher and officers for how they handled themselves and helped this family in a time of need.”

In other business at the meeting, several actions were taken to move Meijer supercenter construction at the Orchard Town Center forward. The first action was an ordinance relating to the final site plan for the development. The ordinance outlines variances for the development for three specific items.

One variance pertains to the number of parking spaces and reduces the number to 543 from 604 as required by zoning and building ordinances. The second is for lighting fixtures increasing the height of the structures to 32.5 feet. The final variance is for signage to exceed the square footage, number of signs and location of signs. 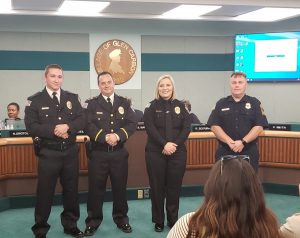 The board approved a request from Chief Link to purchase a 2020 Challenger from the Kansas Highway Patrol. The car will replace a detective car put out of service earlier this year when it was hit while parked and rendered totaled.  Total cost of the vehicle is $31,500.  Funds will come from the insurance payout for the wrecked vehicle along with department seized asset funds and DUI funds.

A check of the sewer revealed cracks and severe corrosion. It is believed that replacement prior to the development construction will alleviate a much more difficult repair once the property development is completed. Total cost will be $196,000. The approval of the request included a waiver of competitive bidding.