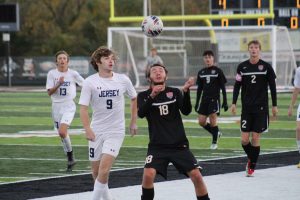 An 11-0 win over Jersey was an appropriate exclamation mark to Triad soccer’s 16-3 season.

During the Thursday match, the Knights saw hat tricks from both TJ Suter and Ethan Kirby. Wyatt Suter added on a pair of goals, while Jake Stewart, Cory Warren and Drew Neu all tallied a goal of their own.

A shutout in goal from Max Rader marked the sixth occasion Triad has held an opponent scoreless this season.

“Great group of six young men that have you know worked hard and done the things we’ve asked them to do. TJ and Stewart are captains and great leaders this year. Then you’ve got the other guys that just work hard and do the things we ask. They’re a great group of kids and I couldn’t be happier for them,” Coach Jim Jackson remarked of his most seasoned players.

Since the current senior class has entered high school, the Knights have amassed a 79-6-5 record and have outscored their opponents 328-62. They have also recorded 50 shutouts and won 14 shortened games after leading by at least 7 goals.

Much of their success can be tied to conference play, where they have finished as champions all four years. Triad has gone 43-1-1 against their 5 league foes over that stretch.

Their senior core has had a dominant run during the only two postseasons during their careers, having reached the IHSA State Finals both times. Those seasons resulted in a second and third place in Class 2A.

Postseason play begins for the Knights on Tuesday, when they will play host to Litchfield or Highland.

Highland would be a familiar face for Triad, with the Knights winning 4-0 and 6-0 in the previous meetings after breaking through their rival’s defensive strategy. On the other hand, Litchfield only shares one common opponent with Triad. Their shared foe, Civic Memorial, dispatched Litchfield 12-1 and has lost to Triad by a goal twice.

Their next match would come three days later against Alton Marquette or Jersey, with the victor winning the Triad Regional.

Coach Jackson knows that even as the top seed, his team will be tested early, “We got a tough draw, even though we’re the first seed. We haven’t seen Litchfield, so we don’t know about them. Marquette has been playing well this year, so you just never know. You have to bring your A-game every night if you want to advance.”

Following a Regional win, the Knights would need to win twice more to take the Civic Memorial Sectional and advance to the Rochester Super-Sectional. A win there would place Triad at the IHSA State Finals hosted by Hoffman Estates High School on Nov. 4 and 5.