Triad football officially punched their ticket to the postseason with a 28-13 win over Waterloo. The Friday 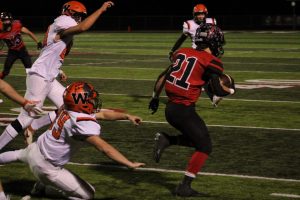 win pushed the Knights to 6-2 on the season and clinched sole possession of second place in the Mississippi Valley Conference.

Turnovers were key to the host’s win and their first one came six minutes in, when Donny Becker emerged from a pile with a muffed Waterloo punt. This set up an 11 yard drive that was capped off by a fourth down touchdown pass from Nic Funk to Landon Zawodniak. A Jake Stewart extra point pushed the home side ahead 7-0.

The Bulldogs responded with a lengthy drive that featured a fourth down pick at the Knight’s 21 yard line. Triad’s defense would stiffen however and a Bret Beckmann sack pushed the visitors well out of field goal range.

Momentum would begin to slowly start away later in the second half, starting with a 92 yard touchdown from Waterloo to tie the game at 7-7. The Bulldogs would punch in another touchdown with less than a minute remaining in the half, but Lexi Stephen’s extra point failed.

Coming out of the half, Triad picked up a quick defensive stop after holding Waterloo to a single first down. This set up a lengthy 65 yard drive, with fullback Drake Keller picking up most of the yardage and scoring on a 20 yard carry.

“We needed to wake up. I don’t have an explanation, but we kind of got them woken up at halftime and we played a lot better in the second half,” Triad Coach Paul Bassler spoke of his team’s improvement in the second half.

Another defensive stop would put the ball back in Triad’s hands. This time, they launched a seven minute drive that reached into the fourth quarter and finished with a quarterback sneak from Funk and a Stewart extra point.

After both team’s traded punts, Waterloo received their best starting position of the game at the 50 yard line. A 15 yard penalty would fuel the Bulldog’s drive, but their possession was ill fated as Dane Henderson intercepted a pass at the five yard line.

The subsequent Triad drive seemed to stall out, but halfback Ryan Hazelwood rushed for a first down of third and twelve. Jason Randoll added another key third down run after rushing for 45 yards on a third and four from the Triad 42 yard line.

Capping off what would be a six minute drive, Colin Qualls punched in a Knight’s touchdown with 49.9 seconds left. Stewart’s trusty leg then extended their advantage to 28-13.

Waterloo marched down field on a flurry of pass interference flags, but Koen Rodebush closed out Triad’s second half shutout with an interception at the five yard line. This was the final possession change of the night.

Leading the way for Triad’s defense throughout the game was linebacker Jarrett Del Rosario, who finished with eight solo tackles and seven assists. Beckmann pieced together another impressive statline with seven solo tackles and a sack to his name.

On the other side of the ball, Keller led the Knights in yardage after picking up 82 on twelve carries. Randoll was close behind him with 78 yards on nine touts.

With their sixth win, Triad kept the door open to a 7-2 finish that would give them high chances of hosting a first round playoff game.

“It’s huge, especially for this team. Our expectations were much higher coming into the season, so being 6-2 after what we’ve been through, I’m elated. But now we need to get this thing cleaned up and make some noise in the playoffs,” Coach Bassler remarked of his team’s improving record.

But to get to seven wins, the Knights will need to dispatch a hungry Lincoln Railsplitters squad. The visiting Railsplitters, who stand at 4-4, need a win to end a 38 year playoff drought.

The week nine opponents share two opponents: Mattoon and Jersey. Triad won 41-22 over Mattoon and 41-14 over Jersey, while Lincoln downed Mattoon 27-7 and fell 26-14 against Jersey.

Coach Bassler knows their final regular season opponent will play tough to make the postseason for the first time since 1984, “This will be the Super Bowl for them, so we’re gonna have to come out ready to rock and roll.”