Financial news both welcome and somewhat unwelcome, a six-figure grant and a six-figure unexpected bill, were topics of discussion Monday at the regular bimonthly meeting of the Troy City Council. 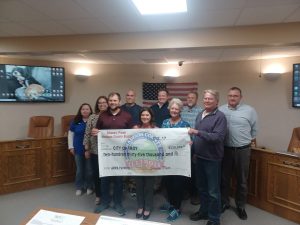 Madison County Board’s Stacy Pace stands center behind a banner and alongside council members and city staff announcing one of several grants to benefit Troy. More than $600K in grant funding will go towards the construction of a roundabout at Troy Road and State Route 162.

On the welcome side, with funding now in place, a problematic intersection near Troy is one step closer to being replaced.

Stacy Pace, Madison County Board District 2, announced county engineers had obtained in total more than $600,000 in grants for transportation projects. The funding will be used to construct a roundabout at the intersection of Troy Road and State Route 162.

Currently, the intersection is regulated with only a stop sign on Troy Road and unabated two-way traffic on the highway. Pace said given the location of the intersection, supporting traffic to and from several communities and near Interstate 55, the upgrade is needed.

“It is a connecting road,” Pace said. “It connects Glen Carbon with Maryville and Troy. And with anyone off 55 coming through, you’re going to have a ton of people. We need everyone to feel safe in Madison County, especially Troy, as that’s our focus here.”

The less than welcome news came in the form of a $375,000 bill from the Illinois Department of Transportation, which had not been appropriated in the current budget.

The bill stems from the South Main Street improvement project, completed now more than six years ago. City Administrator Jay Keeven said when a roadway project is undertaken, it usually includes grant funding from federal and local sources. In the case of this project, IDOT managed the federal grant, with the city being billed throughout and upon completion.

“Well this project was an older project and the bills got submitted to us with the exception of the final bill,” Keeven said. “For some reason, they held this bill for six years, so it was a surprise. It hadn’t been budgeted for.”

Council members during the meeting agreed the bill was legitimate and the money was owed to the state. Payment will come from a surplus of funds collected through the motor fuel tax. With a current surplus in that revenue stream, and a cushion for unexpected expenses built into the overall budget, fallout from the unexpected bill will be minimal.

“We had a surplus of funds in motor fuel tax,” Keeven said. “Motor fuel tax is what was, back in 2015, originally appropriated for this job. We have plenty of money in motor fuel tax. We just didn’t have it on paper in the budget.”

Assistant Police Chief Chris Wasser announced body cameras for the department are expected to be received by Nov. 3. The cameras are required statewide under the Illinois SAFE-T Act, effective Jan. 1, 2023. Wasser said the department is glad to be ahead of the curve on implementation of the new requirements.

“So just a couple of weeks after that (Nov. 3) we will be able to get those into service,” Wasser said. “I think these are going to be linked, our in-car cameras and body cameras. I’m really excited about it. It’s great to get out in front of this.”

In other news from the meeting, the city has entered into a business district redevelopment agreement with developer Gayle Frey. The agreement is related to the property located at 100 McDonald Drive and 710 Edwardsville Road in Troy, where a Panera Bread is in the works.

Through the agreement, the business will be exempt from city taxes for a period of ten years from Jan. 1, 2022 and will receive reimbursement on a 1-percent tax specific to the business district. The district-specific tax reimbursement only applies to money generated by the individual business, not the fund overall, which can be used for various development incentives or infrastructure.

Keeven justified the perks by saying that in order to attract and retain businesses in Troy, which competes with other locales in the metro east, there have to be some benefits in place.

“It’s getting to the point, Glen Carbon, Maryille, Highland are doing the same thing,” Keeven said. “If you don’t offer those incentives for development, the people will go where they can find them.”