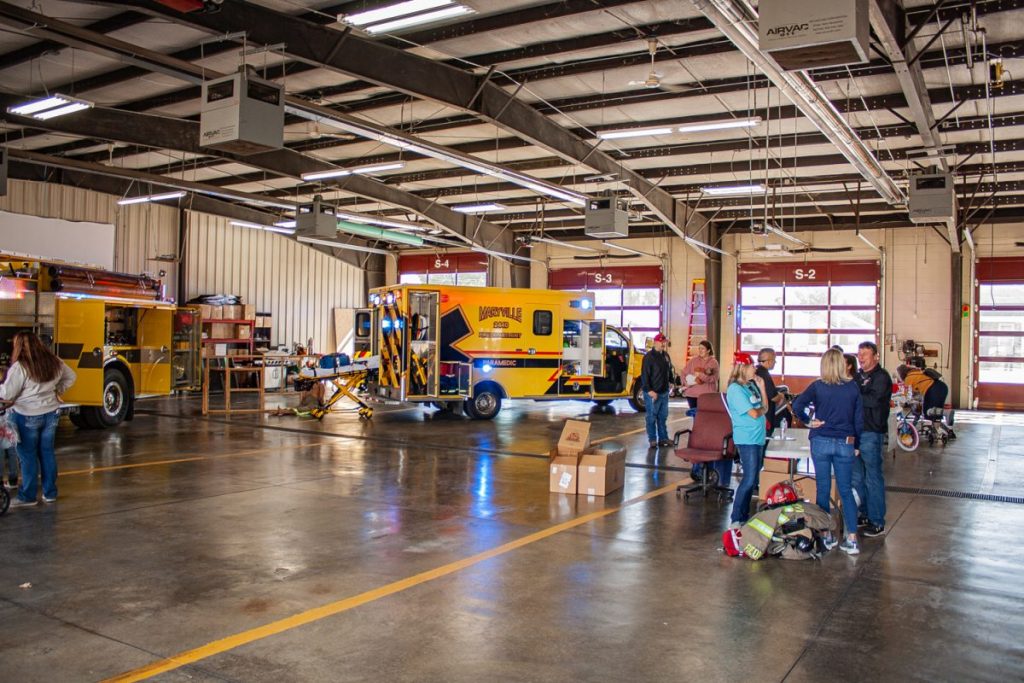 Community members and their families explore the main garage of the Maryville Fire Department.

This year’s Kiwanis Festival and Bark in the Park on Saturday contest gave family members, both furry and not, an afternoon to unwind.

In prior years, it was called the Pooch Party and was held in Drost Park. Fitzgerald said his own personal love for dogs is what made him get involved.

“I’m a big guy,” Fitzgerald said. “I have a dog at home. Her name’s Nala [and] we’re always walking throughout Maryville.For me it’s super easy to be in charge of the dogs just because I have a bond with dogs.”

For his role as chair, Fitzgerald said he serves as the announcer for the contest and helps to find judges for the dogs. Out of the different contest categories, Fitzgerald said he enjoys the trick contest the most due to it always having something exciting, but this year’s costume contest proved to be his favorite of the categories.

Teri Feig, one of the contestants for Bark in the Park participated with her dog, Chili. A cockapoo, Chili competed in the best mixed breed and Halloween costume categories where she dressed up as a tiger. Feig said this was also the first time Chili had ever competed.

“We support the event and we always say we should enter our dog since we’ve been dog owners since 2019,” Feig said.

Gregory Peck, a captain and firefighter of seven years, was the ranking officer for the fire department during the event. Peck said the community involvement the event offers is one of his favorite parts about it.

“It’s a good community outreach,” Peck said. “We let kids sit in trucks (and see) what we do here.”

Peck said the planning for the fire department for events like the Kiwanis Fall Festival involves a lot of cleaning for both the truck and station. Overall, eight members of the Maryville Fire Department volunteered to participate in the event.

The festival also included a petting zoo, a bouncy house, pony rides and various food options. Festival coordinator and village trustee Julie Clark is a member of the Kiwanis Club in Maryville and has organized the event for five years. With the focus on community, she said the festival is really about giving people opportunities to enjoy a free event with their families.

“The idea is that a family can come out for the day and enjoy their family without having to spend any money,” Clark said.