Dorothy Ann Langenwalter, age 95, of Maryville, IL (formerly of Collinsville), born December 15, 1926 in Edwardsville, IL, passed away peacefully with family at her side on Friday, October 7, 2022 at Liberty Village Care Center in Maryville, IL.

Dorothy was a 1945 Edwardsville High School graduate. After high school, she worked for the St. Louis Post Dispatch.  She married the love of her life, Floyd Arnold Langenwalter on May 15, 1949 and then was a homemaker.  Dorothy volunteered in the church office at St. John United Church of Christ in Collinsville where she and h 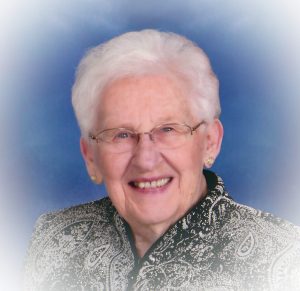 er husband sponsored the youth group when their daughters were young. She was also a member of the Beta Sigma Phi Sorority, Eastern Star, and Daughters of the Nile.

She was preceded in death by her husband, Floyd, after 72 years of marriage; parents, Walter John and Alma B. (nee Warning) Schermann; sister and brother-in-law, Loretta (Glenn) Kruckeberg.

Memorial donations may be made to St. John United Church of Christ or ProMedica Hospice and will be accepted at the visitation or may be mailed to Barry Wilson Funeral home, 2800 N. Center Street, Maryville, IL 62062.