The SIGIC is a band of enthusiasts that restore, refurbish and preserve John Deere Tractors and equipment. It was chartered in 2009, as a non-profit service, education, and recreational organization to assist in the preservation of John Deere two-cylinder tractors, antique farm machinery and implementation. 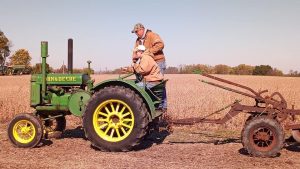 Chad and Connor Zurlliene, father and son, two generations, run a 1930 John Deere GP showing how soil was broken back in the day. (Photo from last year’s Plow Day)

“We like to go out and demonstrate to the people the different items that John Deere made; and bring things back to life, that some people — their great grandfathers, their grandfathers used this equipment to work because a lot of this equipment is obsolete today,” John Payton, SGIC member said.

Weather permitting, potential farmers and people interested in old-fashioned farm machinery are invited to come out to observe and learn about the history of John Deere Tractors from the 1930s to the 60s. There will be an estimated 10 to 15 tractors set to cultivate 40-acres of land beginning 9 a.m. Oct. 29 at the Harvey Meier plot, 7715 Bouse Road, near Serv-Pro and the Knife Shop.

While only members of SIGIC will be breaking ground and allowed on the field due to safety precautions, spectators can line the roads and observe the activities. The rain date is Nov. 4.

A corn sheller will also be on site for people to shell corn if they choose.

“Plow Day came about, one day when three or four of us were sitting around talking about wanting to plow, wanting to actually use the equipment,” Payton said. “I ended up talking to Harvey and Verona Meier to see if our club would be able to plow their ground, and they said, ‘yes,’ so I got everything set up. The first year we had 11 tractors and last year we had 14.”

The Meier homestead, which sits just outside of Troy, is a family farm that has been farmed by at least three generations of Meier men, according to John Payton, SIGIC member. Harvey’s dad farmed it and was actually a dairy farmer, but it started with his grandfather. The farm then went to Vilmer and now Harvey does it, Payton said.

At its peak, the farm carried over 500 acres. Now it has dwindled down to two, maybe three-hundred acres within the past couple of decades.

This will be the last year that Plow Day will be held in succeeding years. After this year, the event will be held every three to four years because the antique equipment is actually bad for the soil if used every year.

“It’s got something to do with the nutritional value of the soil, so you don’t want to do it all the time. It will continue every three to four years after this year,” Payton said.