If a team could write the script to their season, it would not look much different than what Triad’s girls tennis team has achieved. Following an undefeated regular season and a perfect score at the Mississippi Valley Conference tournament, the Lady Knights bounced into their home IHSA Sectional on Oct. 13 and 14.

The team would not only qualify both their singles competitors and their doubles team, but they would finish as champion and runners-up in both divisions. This marked the first time a Triad tennis team has done so.

Coach Devan Faulkenberg talked about the dominant performance led by his six state qualifyin seniors, “It’s definitely a very exciting weekend. They played well to make that happen and it’s really special, that’s for sure. We have so many good athletes, we’re kind of spoiled in this class.”

The singles championship match came down to Triad seniors Jocelynn Carmody and Logan Looby. Carmody would win the match 6-0, 6-0 after doing the same to her three other opponents on their way to the title.

Looby had plenty of succes of her own to reach the title game and only dropped one set enroute to the finals.

The senior still views her battle with Carmody as a positive heading towards the state tournament, “It’s really important to me. Every single practice I get to play Jocelynn, so it’s good competition.”

In the doubles championship, it came down to the Triad senior duos of Sami Hartoin and Karen Speer against Caty Burton and McKinley Saffel. This matchup was a rematch of last year’s Sectional championship, where Hartoin and Speer proved victorious.

But this time around, it was Burton and Saffel that finished as champions with a score of 6-4, 6-1. The eventual champions only other dropped sets came in a 6-3, 6-1 win over Father McGivney.

Burton looks forward to getting another chance at the state tournament with Saffel, “Our play has improved and we’ve done some different things to kind of change up our game. My serve is different, so I definitely have a different mindset going in.”

Her partner shared a similar sentiment, “It’s my last season, so it’s good to be going back with some experience.”

Speer and Hartoin breezed through their bracket as well, winning three matches. They just dropped two sets prior to the final in a 6-1, 6-1 match with Althoff.

Headed to the state tournament, Speer also relishes in the fact that six Lady Knights qualified, “We have six people that qualified for state, so I’m excited. The more points we can get up a state the better we can do as a team and we can pick each other up if someone has a bad day.”

Hosted by Buffalo Grove and several surrounding high schools, the IHSA State Finals are held from Oct. 20-22. Individuals and doubles teams also receive rankings from a seeding committee to determine where they fall in the brackets.

“State success depends on what kind of draw you get. I think we’re definitely lined up with a singles seed with Jocelyn Carmody. With our doubles teams, I think either one or there may be an outside chance that both of them could be seeded,” Coach Faulkenberg discussed his ranking expectations for his state qualifiers.

While Carmody is hoping for a high seed, she also has her eyes set on making a deep run through the singles bracket, “I do want to make it to Saturday this time. It’s only been done twice, so that’s a big goal of mine.” 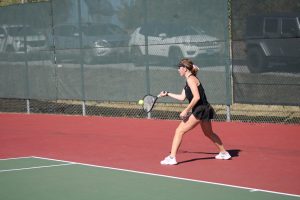