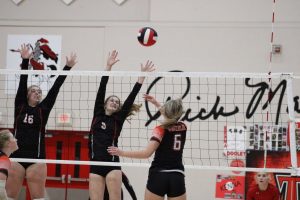 The Oct. 25 postseason match between Triad and Highland volleyball continues to inch closer, as the Lady Knights finished another week’s slate of action.

Their week began on Oct. 11 with a visit to the Civic Memorial Eagles. The Mississippi Valley bout had clear stakes as Triad, Civic Memorial and Jersey are battling for fourth place in the conference.

There was little separation in the first set, but the Bethalto birds escaped with a 25-23 victory. Civic Memorial won the second set as well, this time with a wider margin of 25-19.

“I am so blessed to have those two seniors in this program. They are absolutely amazing young women,” Coach Jami Parker said of the fourth year duo.

The next four matches were not so kind to a shorthanded Triad squad, who would lose against the likes of Rochester, Breese Central, Pekin and O’Fallon.

One regular season game remains on the schedule for the Lady Knights, who will visit Jersey on Oct. 18. Their regular season finale will play a role in determining if Triad can wedge themselves into fourth place in the conference.

Coach Parker talked over the importance of their final contest before the playoffs begin, “You always want to finish the season with a win, so we’re gonna go out there and work for it. We’ve taken several injuries right now, we’re down three starters, so hopefully we’ll have a couple of them back up and running by next week. But I have to say that these younger kids are doing a really nice job going in and working hard.”