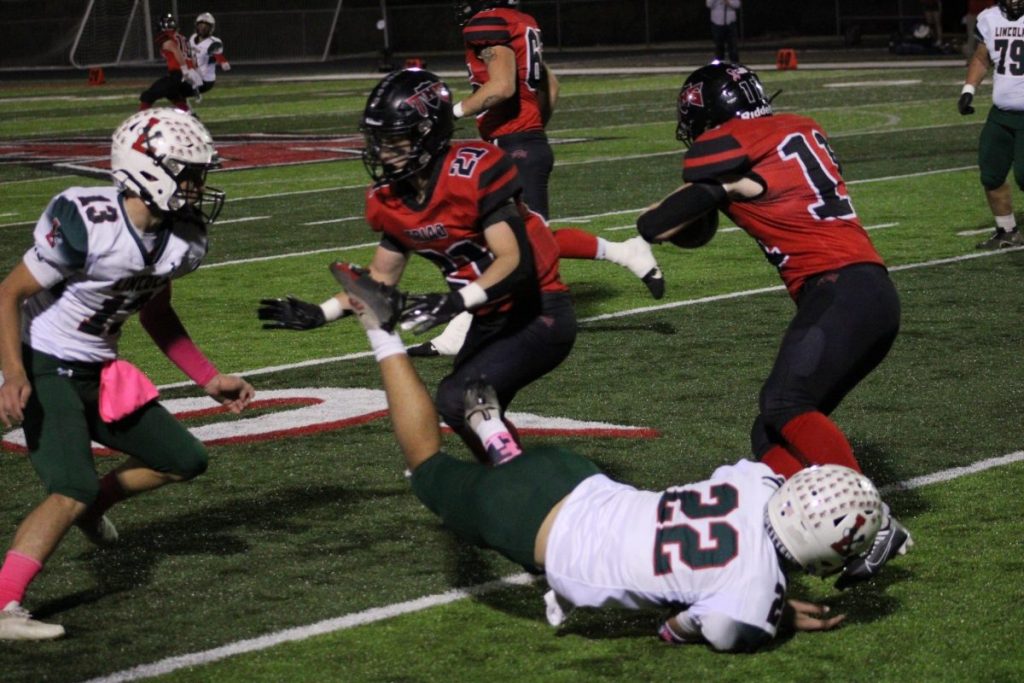 As the IHSA officially announced football pairings this past Saturday, Triad learned their first round fate – hosting the Centralia Orphans.

The 5-4 Orphans last played the Knights in 2006, with the Knights recording a 60-7 victory. Overall, Triad is 6-1 against the Centralia Orphans with Coach Paul Bassler.

“They’re very athletic and a good first round matchup,” Coach Bassler said of the Orphans that are set to visit Triad on Oct. 29 at 2 p.m.

Centralia comes to town with a 5-4 record after a regular season campaign that saw them tie for the South Seven conference title. Mt. Vernon, Marion and Cahokia are the other co-champions of the six team league.

The first round opponents have three common opponents this season in Mascoutah, Mt. Vernon and Collinsville.

Against the Collinsville Kahoks, Triad lost 29-14 and Centralia fell 35-31. In what is now a forfeit win, the Knights lost 27-22 to Mt. Vernon. Centralia lost their battle with the Rams in 35-7 fashion.

Their comparative scores against Mascoutah may be the most interesting. The Orphans led 28-7 at halftime against the Indians, but they ran out of steam and lost 37-28. Mascoutah was less fortunate against the Knights, losing 34-14.

Highlighting the Centralia roster is Amir Johnson. The Orphan has totaled 15 touchdowns and 1171 offensive yards so far this season.

Jeh’Chys Brown is also another key part of the puzzle for the Orphans. A starter on both the offensive and defensive line, Brown has committed to play collegiate football at SEMO.

Prior to their postseason matchup being set, Triad defeated the Lincoln Railsplitters 28-0 to improve to 7-2.

But the then 4-4 Railsplitters, just one win away from their first playoff berth since 1984, would not go without a fight.

Quarterback Nic Funk captained Triad downfield in the game’s opening drive, mixing in both big plays on the air and ground. Jason Randoll would finish the drive with a 12 yard touchdown scamper and a failed extra point kept the score at 6-0.

Lincoln responded with a lengthy drive of their own that reached far into Triad territory. But a big hit from defensive tackle Jaylun Nelson on the quarterback caused an errant pass to fall into the hands of Ryan Koch.

Later in the second quarter, Randoll provided another big play for the Knights as he appeared to be trapped in the back field, but found himself 50 yards downfield after a flurry of jukes and stiff arms.

The run of the year candidate quickly translated into points as Funk delivered a percision 27 yards strike into the endzone for Colin Qualls. A throw to Ryan Hazelwood in the end zone added two points to their total to go ahead 14-0.

Funk’s passing prowess continued to pay dividends in the first half. With just 43 seconds before the intermission, the senior quarterback found Tashon Crockarell for a 25 yard score. Kicker Jake Stewart tacked on a point after to go ahead 21-0.

“It was definitely a match-up thing. The offensive line did really well and the receivers made some great plays, so made my job a lot easier,” Funk spoke of the passing game’s success against Lincoln.

Triad’s aerial proved lethal in the second half as well. On a 95 yard drive that featured several big catches from Isaac Ackerman, Funk finished the job with another scoring toss to Crockarell. Stewart’s extra point delivered the final score of 28-0.

Thanks to his third scoring toss, Funk finished 15 of 21 in the air for 249 yards and three touchdowns. Ackerman, Crockarell, Randoll and Qualls all finished over 30 yards receiving.

On the other side of the ball, several Knights chipped in statistically. Koch led the defense with six solo tackles, while Donny Becker, Tristan Darby, Nelson all surpassed four in that category.

The victory continued a promising trend for a Triad team that has turned the ball over only once in their last five games. That trend kicked off after turnover plagued losses to Collinsville and Mt.Vernon.

Coach Bassler talked of his team’s much improved ball security, “We had eight in those two games, so we’ve been preaching it. We’ve been working on it in practice, so it’s nice to see that it’s paying off.”