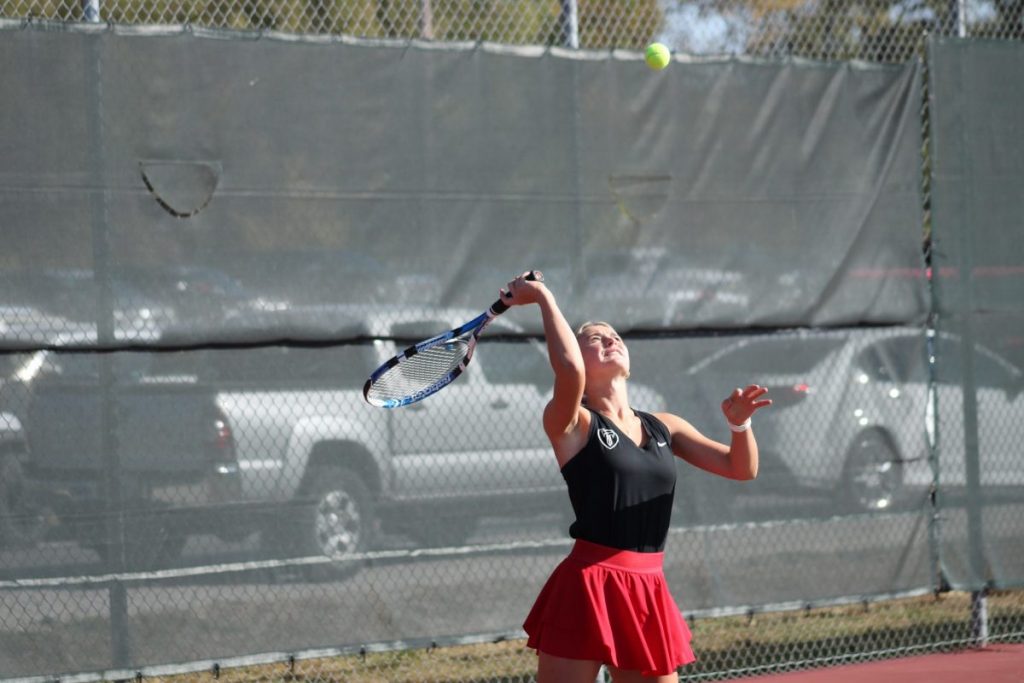 Prior to last week, Triad had twelve top three IHSA state finishes across all sports. Thanks to a third place finish from their girls tennis team, that number has grown to thirteen.

Their most recent state trophy is among the most impressive, given the odds it came against.

With only two classes, tennis has less state trophies to pass around than other sports. Competing alongside the Lady Knights in Class 1A, 161 other schools participated in the IHSA postseason.

The trophy is also one of very few tennis trophies to reside in the southern part of Illinois. A 1992 third place finish from Belleville West is the only other occurrence of a girls tennis trophy in this portion of the state.

To earn their third place finish, Triad scored 19 points at the State Finals tournament. The previous best in program history was 10 points.

Coach Devan Faulkenberg said of the trophy earning finish, “One of the biggest things that stands out to me is that this was truly a team effort. All six girls contributed at least three points to the cause, and it took every last point for us to get this done. 18 points would have been good enough for a trophy last year, but we needed all 19 this year.”

In singles action, Carmody led the way for Triad with wins over Lemont, Chicago(Latin), Danville and Peoria Notre Dame competitors. She would finish in ninth place with eight points to her name.

Carmody’s second and final loss came against Crystina Lee of Timothy Christian. Lee would go on to finish in sixth place overall.

Also finishing in ninth place was the doubles team of Speer and Hartoin. This seasoned duo scored victories over Sycamore, Metamora, Flora and Dunlap to tally eight points.

The ninth place finishes from Carmody in singles and by Speer and Hartoin in doubles are tied for the best finish by any Triad tennis representatives at the state tournament.

More doubles points were delivered by the rackets of Saffel and Burton. The veteran pairing won a championship bracket battle with Glenwood. Later, they bested Carbondale and Waterloo in consultation play.

The final piece of the puzzle for Triad’s third place finish was Looby. She grinded out a 6-4,6-4 win over Gianna Cox of Providence Catholic to score two points. The senior later added a crucial point with a 6-4,6-2 decision over Emma Cushing of Ottawa.

“It’s an amazing accomplishment for Jocelynn, Karen, Sami, McKinley and Caty to end the season with All-State finishes but Logan Looby deserves a ton of credit as well. There were 319 singles players in the 1A draw when Sectionals started. For our sixth girl to post a 25th place finish, ahead of a ton of number one players from other schools–that just blows me away. It took that plus All-State finishes from everyone else. That’s a pretty big ask, but our girls delivered all season long and they deserve all the credit in the world,” Coach Faulkenberg spoke of his team’s collective effort.

Faulkenberg is also optimistic about the effect their performance can have on the future of Triad tennis, “I hope this finish gets some younger Triad kids excited about tennis. That would mean a lot. The reception we got when we got back in town meant the world to us too. I’m not going to hold my breath for more state trophies, but I’ll say our boys are going to be exciting to watch in the spring.”

The third place finish at the state tournament will forever headline the team’s finish, but the Lady Knights picked up several more accolades along the way. Among those accomplishments was a 24-0 regular season record, the first undefeated season in school history.

Triad also won both their Sectional and Mississippi Valley Conference meets without dropping a set. Their conference performance is doubly impressive considering Waterloo went on to win their own Sectional meet.